Apps are the lifeblood of a smartphone or tablet ecosystem. Despite the fact that the PlayBook had 3,000 on day one, more than any other platform at launch, it’s hard to find many essential ones. There’s an excellent Facebook app – the first one Facebook has optimised for tablets – and the video calling feature is great, though you do have to hold the PlayBook a little further from you than is quite comfortable. 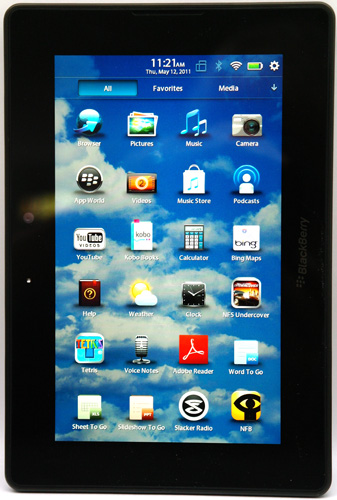 The mapping program from Bing is also good. Beyond that, though, it’s largely a matter of waiting for Android. In the summer, you see, the PlayBook gains an Android player. Android apps that are re-submitted to RIM will be available to download from BlackBerry App World and appear on-screen just like native apps. It’s a clever way to increase app choice quickly, but it’s not ready yet.

The 1GHz dual-core processor works splendidly – the PlayBook is fast and doesn’t keep you waiting, however much work it’s doing. The touchscreen is beautifully responsive and the accelerometer spins the display as soon as you’ve tipped it, though it’s not over-sensitive as the first BlackBerry Storm was. There’s also an orientation lock helpfully placed on the main screen.

Given its media savviness, it’s worth saying how you get content on to the tablet in the first place. BlackBerry Desktop software makes USB syncing easy enough – if you have a Windows PC. Mac users have to wait for a forthcoming update. Never mind, there’s always drag-and-drop, which works fine. Windows users can do this too, of course. 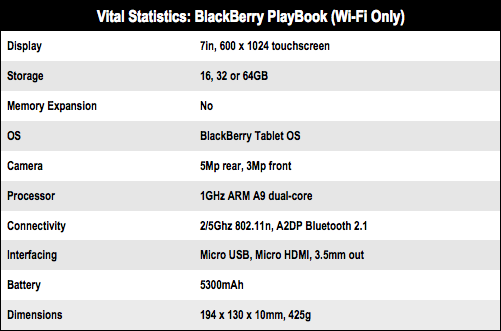