TMS has doubled the capacity of its PCIe flash card and almost tripled its performance.

The RamSan-70, code-named Gorilla, has a capacity of 900GB of single-level cell (SLC) flash, twice that of the preceding RamSan-20. Gorilla, using 32nm NAND from Toshiba, is 2.75 times faster than the RamSan-20, half the size, and has a longer lifespan; 18 years at 25 per cent write bandwidth. 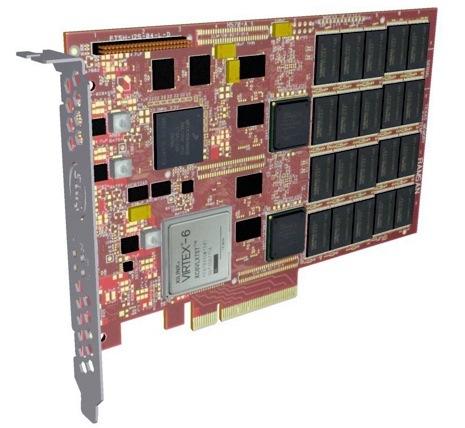 The random read IOPS number is more than 330,000 and the product delivers slightly over 2GB/sec bandwidth. How does this compare to competing products?

The leading product in this SLC PCIe flash part of the storage market is Fusion-io's ioDrive Duo, holding up to 320GB, and rated at 261,000 random read IOPS (with 512B blocks), 262,000 random write IOPS, and 1.5GB/sec sequential read and write I/O. The new RamSan blows it away.

Intel is supplying PCIe NAND for EMC's Project Lightning but the performance numbers haven't been released.

The RamSan-70 does not rely on the host processor for flash translation as there is an on-board PowerPC CPU, firmware-upgradable Xilinx FPGAs (field-programmable gate arrays), a lightweight host driver. and a complete on-board Flash Translation Layer. Flash look-up tables are included and there is on-board RAID.

TMS has made this an exclusively OEM product. The pricing is 15 - 20 per cent less than the RamSan-20, there is a four to six week lead time, and OEMs have to commit to 100 boards a year. First OEM ship will be in four to six weeks.

TMS is having a good mid-year, having scored a record-breaking SPC-1 benchmark with its externally-attached RamSan-630 NAND array, and now bringing out the RamSan-70. With EMC megaphone marketing the idea of PCIe flash, it looks like good timing on TMS's part. ®

Top leaders have all been credibly accused of coercive behavior and actions, say NLRB
On-Prem1 Feb 2023 |

ChatGPT: Please explain the difference between 'token efforts' and 'putting the genie back in the bottle'
AI + ML31 Jan 2023 | 1