Lone gas giants wander the empty reaches of the galaxy

A team of astronomers has identified a novel new kind of galactic wanderer - lone, Jupiter-sized planets expelled from forming solar systems and drifting in the empty void between the stars.

The researchers, led by Takahiro Sumi of Japan's Osaka University, spotted 10 such free-floating "orphan planets" in data from a 2006-7 microlensing survey of our galaxy's centre, which searched for the tell-tale sign of transiting bodies' gravitational fields distorting light from distant stars.

Team member David Bennett, of the University of Notre Dame in Indiana, explained that this first sighting in a small portion of the Milky Way points to enormous numbers of orphans. He said: "Our survey is like a population census. We sampled a portion of the galaxy, and based on these data, can estimate overall numbers in the galaxy." 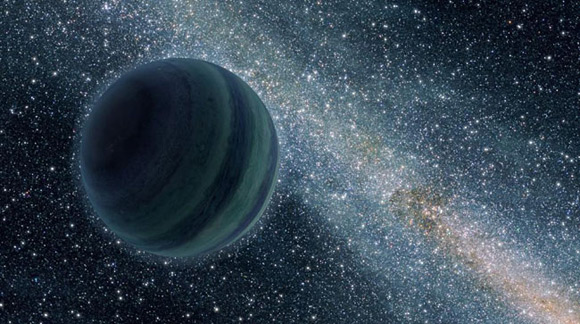 In fact, the scientists reckon there are twice as many wandering Jupiters as there are stars – "hundreds of billions of lone planets" each ploughing a solitary furrow in the galactic ether. Takahiro Sumi said: "The existence of free-floating planets has been predicted by planetary formation theory, but nobody knew how many there are."

The microlensing technique used to nail the planets isn't sensitive to worlds smaller than Jupiter and Saturn, but since "lower-mass planets like Earth should be ejected from their stars more often" there are potentially even greater numbers of Earth-sized orphan planets out there.

The findings are published in today's edition of Nature, where astronomer Debra Fischer of Yale University said: "This is an amazing result, and if it's right, the implications for planet formation are profound."

NASA has more on the wandering Jupiters here. ®