The word on the street is that more executives at struggling IT giant Hewlett-Packard are being shown the door by new CEO Leo Apotheker. 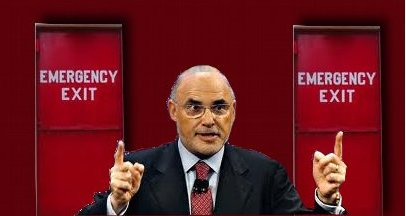 Apotheker: 'Ladies and Gents, let's have a look at your closest exits'

A report in Bloomberg says three more top executives are leaving HP as the company shakes up its services business to try to get it growing and more profitable.

According to Bloomberg, Marius Haas is leaving HP for a job at leveraged buyout king Kohlberg Kravis Roberts & Co. Haas was made senior vice president and general manager of HP's ProCurve Networking business unit back in June 2008, and in November 2009, HP succumbed to Cisco envy and paid $2.7bn in cash to acquire Ethernet pioneer 3Com.

Haas cut his teeth at Intel, jumped to Compaq, and came to HP through the Compaq deal in 2002. Haas had been in charge of all of HP's acquisition integration as SVP of strategy and corporate development since 2004, which is why the job at KKR makes sense.

Maybe KKR will be interested in picking up some unwanted HP business units?

Tom Iannotti, who was tapped to lead the Enterprise Services unit underneath Ann Livermore back in February 2010, is apparently retiring from HP. Iannotti was previously managing director of HP's Americas region and came to the company through the Compaq acquisition as well, and ran Compaq's enterprise services business. Along with the ProLiant x64 server business, that Compaq services biz was one of the things that former HP CEO Carly Fiorina was hot to trot over.

In a conference call with Wall Street analysts last week going over HP's second quarter of fiscal 2011 numbers ended in April, Apotheker said that the HP services business, the amalgam of HP's own tech support and professional services business with the outsourcing and systems integration business it got through the acquisition of EDS, had "overexecuted operationally and underinvested strategically" and that was one of the reasons why this business is not growing as fast as Apotheker thinks it can.

Next page: Change already long past due
Page:
Tips and corrections
9 Comments

IBM's server revenue grew rather nicely, but Lenovo's in a more-shipments-less-revenue trap