Farts, birds, and billions of bucks

Love it or loathe it, Apple's iOS App Store is a roaring success – so much so that its App Store Police have just approved their 500,000th app.

This startling stat comes from the app-watchers at 148Apps, who are quick to point out that there are not a half-million apps in the App Store, rather that there have been that many apps approved for the store since it appeared in July 2008. 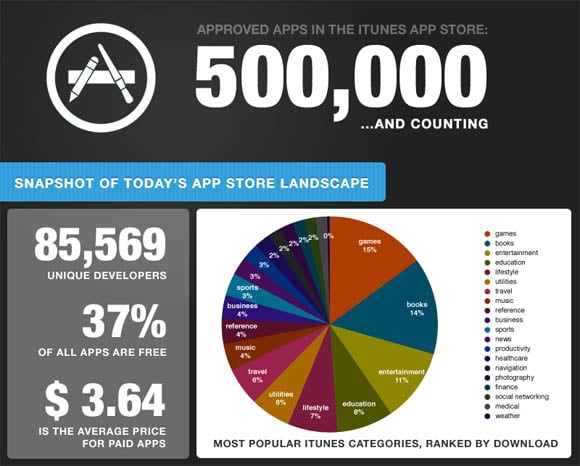 The actual number of available apps hovers at around 400,000 or so – a number that we're almost certain to be told two weeks from now when Steve Jobs either does or doesn't take the stage for a keynote presentation at Apple's Worldwide Developer Conference kick-off on June 7.

The difference between available apps and total apps approved is, of course, due to the fact that some apps were never upgraded for new versions of iOS, some were subsequently yanked by the App Police when they had second thoughts, and some were simply orphaned by their devs.

Working with the app-trackers at Chomp and the game publishers at Electronic Arts' Chillingo division, 148Apps amassed a prodigious passle of intriguing stats about Apple's über-sucessful – if also über-controversial – app-distribution juggernaut:

Despite all these bewildering stats, the App Store is not the only game in town – not by a long shot. One analyst predicts that Google's Android Marketplace will overtake the App Store in total available apps as soon as August of this year.