A startup called BlueStacks has come out of stealth mode with shiny new venture funding and an eponymous product that lets Android apps run on PCs.

BlueStacks runs the open source Android runtime environment on top of an x64 hypervisor so Android apps – excepting those compiled down to ARM hardware using C and C++ – can be downloaded onto Windows-based PCs and run natively.

BlueStacks founder and CEO Rosen Sharma tells El Reg that the company was created in March 2008 after a bunch of serial entrepreneurs ( including Sharma, who was previously chief technology officer at antivirus software maker McAfee) sat around with their kids.

One child was playing with apps on a smartphone and then wanted to run them on a netbook – and couldn't believe it when her father told her it wouldn't work.

There was, of course, no reason why it couldn't be made to work, and so Sharma and friends set about doing just that by using a virtualization layer. 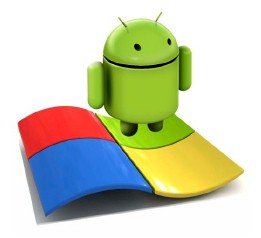 The initial version of the BlueStacks Android runtime for Windows makes use of the open source VirtualBox hypervisor for PCs and servers, now controlled by Oracle, to create a virtual container for the Android runtime. The company, however, is already working on a second iteration of the product for which it will create its own hypervisor layer.

"We optimized VirtualBox heavily for Android, and then we figured out that there was an even better way to do it," brags Sharma, adding that compared to what an Android runtime environment needs, VirtualBox is quite a heavyweight.

BlueStacks has not yet decided if it will open source its homegrown hypervisor when it's available.

The initial release of BlueStacks includes the virtualized Android runtime, which is itself a Linux kernel hosting a modified Java virtual machine, Davlik, that was tweaked expressly for smartphones. Android apps are written in Java, for the most part, which is why they are portable in the first place.

BlueStacks has not done any emulation at all to make Android apps run on Windows, but rather to move over an entire Android environment (based on the open source Android project) to a PC that makes the Android app think it is running on an ARM-based smartphone or tablet. 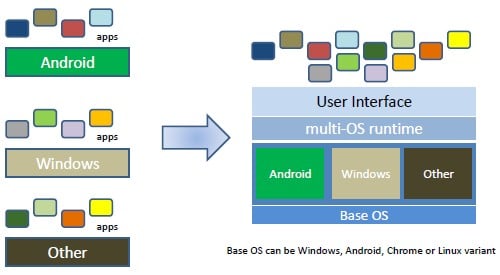 BlueStacks will let you do it all from your PC

The BlueStacks environment can allow for each Android app to be launched from and icon on the desktop like any other Windows application, or it can present an entire Android interface to the user exactly like the one on a smartphone or tablet.

Applications available through the Amazon AppStore for Android can be downloaded into BlueStacks and run just as if they were on a smartphone. Google's Android Marketplace is not yet an option because Google only allows apps from there to be downloaded to ARM-based devices at this time, though this will no doubt change.

Technically, that is possible, but legally it is impossible

There are over 200,000 Android applications available in the world today, and Sharma says that although BlueStacks has only been able to test about 8,000 of the key ones, it had no problems except with applications that make use of the Android Native Developer Kit.

The NDK allows programmers who are looking for speed to add snippets of C or C++ code and run it natively on the ARM processor. Obviously, such code will not execute on an X64 processor.

But Sharma hints that such capability is coming down the pike, although he will not say how such a feat will be accomplished. It could involve recompilation of C and C++ or an emulation layer of some sort.

The one thing that BlueStacks won't be doing any time soon is enabling iPhone and iPad applications to run on Windows-based PCs.

"Technically, that is possible, but legally it is impossible," says Sharma with a laugh.

The exploding popularity of tablets and the proliferation of smartphone applications gives BlueStacks an eager set of partners: PC makers who are trying to figure out how to catch the tablet wave as quickly as they can, or at least stave off the inevitable.

"The world has changed since the iPad came out, but a lot of people still have PCs," explains Sharma. "But PC makers are really suffering from the iPad and they really don't know what to do."

For some people, having a particular set of apps that they run on their personal smartphones or tablets run on their business Windows laptops and desktops will be good enough.

So BlueStacks is working out distribution deals with Microsoft and Citrix Systems and a slew of OEMs, including Fujitsu, Asus, Sony, Quanta Computer, and Samsung, that will see the BlueStacks environment put on PCs.

At the end of June or in early July, Sharma says the company will announce a downloadable BlueStacks player so end users can see how it works on their PCs. The product will go into production sometime in the fourth quarter.

BlueStacks has not quite settled on how it will monetize the Android runtime environment, but Sharma tells El Reg that the idea is to make it free to end users who are using maybe 10 to 15 Android apps and then to charge once they have more than that. The company will also sell OEM licenses to PC makers and operating system makers that want to embed an Android runtime in their OSes.

And they will pay, says Sharma, because of the enterprise-class features that BlueStacks is adding to the environment, including data sharing across environments, printer sharing, encryption, and central management of Android apps.

One means of accessing the BlueStacks Android runtime and the Amazon AppStore applications for Android will be through the Receiver universal client, created by Citrix Systems. This capability was demonstrated at the Citrix Synergy conference in San Francisco this week. The commercial-grade support of BlueStacks via Receiver is expected in the third quarter of this year.

There is nothing in the architecture of BlueStacks that won't allow Android applications to run on Linux or Mac OS operating systems, and the company's presentation mentions Google's Chrome OS as a future option, as well.

In addition to coming out of stealth mode this week with its Android app environment, BlueStacks also announced that it has received $7.6m in Series A funding from Ignition Partners, Radar Partners, Helion Ventures, Redpoint Ventures, and Andreessen Horowitz. Frank Artale of Ignition and Kevin Compton of Radar are now on the BlueStacks board of directors. ®