Review "Amateur hour is over," reads the RIM PlayBook ad inside the Office Max shop around the corner from The Register's San Francisco bureau. As I walk by, looking for a printer cartridge, RIM tells me that its new PlayBook is the world's first "professional-grade" tablet.

That's not the most original line in US advertising history, but it says something about the PlayBook and what RIM is trying to achieve with its first tablet, a device with its sights locked on Apple's iPad. 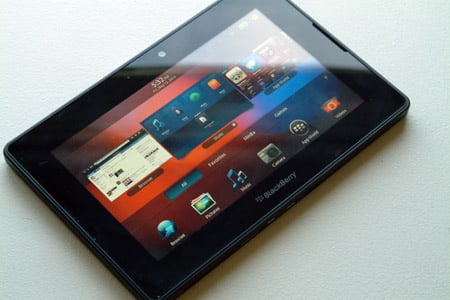 Released in April, the PlayBook is slightly thicker than the iPad – 0.4 of an inch versus .34 of an inch. It also feels denser, possibly thanks to its more compressed form factor: it's about two inches smaller than the iPad in height and width, and lighter by 0.4 pounds. My review unit was the 16GB model, which like its 32GB and 64GB brethren features a seven-inch, 1024-by-600 display, is powered by a 1GHz dual-core ARM Cortex-A9 processor, and runs RIM's Tablet OS.

But this isn't a competition in which the winner is judged just by thinness, size, or tech specs. That Office Max ad precisely defined the terms of RIM's challenge to the iPad: "multi-tasking, app-rocking, Flash-loving and ultra-portable."

RIM has been building smartphones for the working classes – albeit pencil-necks instead of GMC's leathernecks – for 12 years. It is now promising something founded on the tough and reliable heritage of the machine that made RIM's name: the BlackBerry. Like that smartphone, the PlayBook is designed for business – which might explain why the polished black frame surrounding the PlayBook's touch screen says "BlackBerry" instead of "PlayBook": RIM wants to remind you of the connection and the brand.

But there's more. RIM is going up against Apple in an area where the iPad is both at its weakest and its strongest. Yes, we mean Adobe's Flash. RIM promises to work with the internet as it is today, a place where Flash is pervasive.

People have been charmed by Apple's whimsical "there's an app for that" approach to using the web and plenty of ordinary users probably haven't even heard of Flash Player. But they will wonder why sites they loved when they surfed on their Mac or PC and that are built on Flash suddenly don't work on their iPad. The answer is simple: Apple chief executive Steve Jobs doesn't allow Flash on the iPad.

RIM makes a big point of this in the US TV ads running for the PlayBook, where the company loops the infectious chorus to Queen's Flash (sing it with me) "ah-ah, savior of the Universe!"

By following the Flash road, RIM's PlayBook does something unintentionally ideological, too. It serves you a version of the internet as it was probably imagined by Tim Berners-Lee instead of as it's being reinvented by the CEO of a Silicon Valley computer manufacturer: Jobs.

One believes the internet is a place of architectural diversity and where data should roam free. The other is building a fenced-off society that keeps data in and whose rules state that apps must be built "this way". And that way means no Flash. While Flash may not be open, its ubiquity does make it one of the forces for the open movement of data online.

Using the PlayBook, you get the Jobs-free edition of the internet.

Browsing is through a WebKit-based browser that is simple, fast, and easy to grasp. The browser gulps down HTML5. You can open tabs by clicking a "new tab" icon. And it worked with most sites I hit during my test – although not all.

Hulu.com said it didn't support the browser I was using, a troubling sign. Otherwise Flash content played just fine, while the PlayBook comes with a version of YouTube tailored to the tablet's limited screen and that can handle finger-based input.

Early reviewers have pounded the PlayBook for not having enough applications to download or use. The gold standard is – of course – Apple's App Store with 350,000 apps, about 100,000 of which claim to be iPad-optimized. While RIM's existing App World holds 20,000, it's back to the beginning for the PlayBook, I'm afraid. At present, none of these work on RIM's tablet. 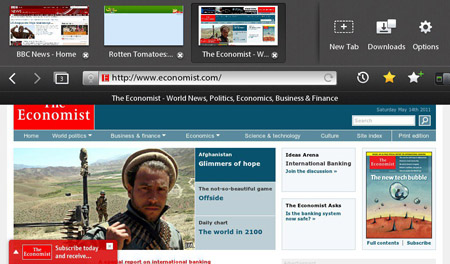 The web seen through the PlayBook's browser: What would Tim Berners-Lee think?

RIM reckons this will soon change: 3,000 apps have been submitted to App World, and the PlayBook will run Android apps – although you'll have to download them from App World not Google's Android market – and also existing Blackberry Apps will run on the tablet using a special player.

Today, however, the PlayBook comes up short on numbers and brands. In RIM's App World, there's no Shazam or Pandora for music junkies, New York Times or The Economist for current-affairs buffs, and no Angry Birds for – well – whoever is its target market.

There's also no PlayBook-version of Facebook or Twitter, but this isn't a real problem: you can use the existing mobile versions - another win for the idea of using the web as is and not as one company's CEO wants you to.

And while there's no Kindle from Amazon, there is Kobo. While RIM probably would love to have the Kindle on the PlayBook, Kobo's presence means as a consumer you're actually getting a real choice in terms of the ebook supplier and reader instead of simply getting served the industry default. This is another point to the open-web team of Berners-Lee and Co because – unlike the Kindle, which keeps its books prisoner behind a proprietary Amazonian fence – Kobo employs the open Electronic Book Publication Standard (EPUB) used on other readers, such as the Barnes & Noble Nook and Sony's Reader.

The PlayBook also has a music player and a music store, from 7Digial.

Early reviewers who pounded the PlayBook for missing apps have overlooked an important fact, and it's something that speaks volumes about how much Jobs has succeeded in shaping our expectations of tablets.

One reason that the iPad needs apps is because Flash isn't allowed and because Flash is so pervasive online. With the PlayBook supporting Flash, there is reduced pressure for those with existing Flash apps to rewrite or for RIM to bulk out App World; the actual pressure is coming from industry expectations that you must be like Apple in order to succeed and the associated perception that not having an bulging app store means you're toast.

Next page: Doing the same with less
Page:
Corrections Send us news
63 Comments