'Romley' for a premium

Looking ahead to 2011 and early 2012, Intel has a number of different variants of the "Romley" platform aimed at different parts of the server racket coming out. A Romley platform designed for "premium" single-socket and "entry" two-socket servers will be comprised of the "Sandy Bridge-EN" Xeon E5 processor, the Socket-B2 (LGA-1356) socket, and the "Patsburg" C600 chipset. A variant of this two-socket Romley platform will be aimed at small form factor servers – think half-width two-socket motherboards used in blade and cookie-sheet servers.

A beefier version of this two-socket Romley platform will come in uniprocessor and two-socket variants and will sport the Socket R (LGA-2011) socket and make use of the Sandy Bridge-EP variant of the Xeon E5 processor. Further up the stack, Intel is cooking up a four-socket Romley platform that will use the high-end "Sandy Bridge-EX" processors. The former Romley platform will use a Patsburg chipset, while the latter one will use a kicker to the current Boxboro chipset. As you can see, the high-end two-socket and low-end four-socket servers of the Xeon future will use the same Socket R socket, which will make life easier for server makers.

The big differences between the midrange Romley platforms have to do with what is activated on the Patsburg chipset and what is not, according to documents that El Reg has been able to get its hands on: 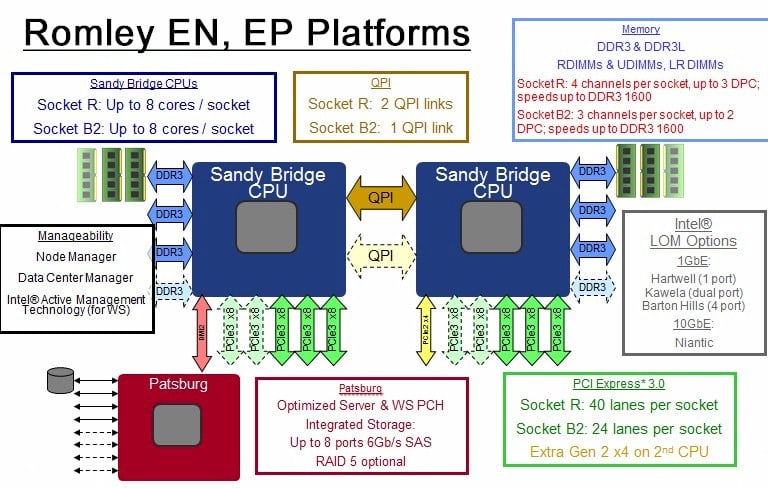 The Romley servers based on the Socket-B2 socket will be able to scale up to eight Sandy Bridge cores per socket, but the B2 sockets only have one QuickPath Interconnect (QPI) link between the two processors on the board and only three memory channels per socket with two DDR3 DIMMs per channel (DPC in the chart). The Patsburg chipsets used in the Socket-B2 Romley machines will implement 24 PCI-Express 3.0 lanes per socket, which can be carved up in a number of different ways.

The fatter Romley Socket-R machines will take on the full Sandy Bridge core count of eight cores, but there will be two QPI links between the sockets for improved performance on SMP workloads, four memory channels per socket and three DIMMs per channel for higher memory capacity and bandwidth, and 40 PCI-Express 3.0 lanes per socket for peripheral expansion. GPU coprocessors will eat this I/O for lunch.

There are a mix of LAN-on-motherboard (LOM) Gigabit and 10 Gigabit Ethernet options for networking. The industry has been waiting for 10GE ports on motherboards, and with the Romley platforms, Xeon server makers will finally have them. This will make the cost of 10GE networking come way down and spur the adoption of 10GE switches in the data center.

Next page: A 'Patsburg' for every need
Page: