Review HTC’s latest high-ender is the first dual core device from the Taiwanese company and offers a huge screen, improved 8Mp camera, Android 2.3 Gingerbread and the latest HTC Sense user interface. The HTC Sensation is available from Vodafone only to begin with though, and the big red one isn’t saying for how long… 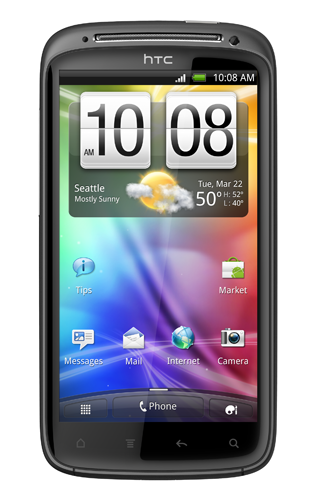 Even from a distance and with your eyes half closed, the Sensation is clearly an HTC handset, due in no small part to the fact that it has the same aluminium unibody casing that we’ve seen previously on the Desire S and others. It’s bigger than most though, and it will fill a pocket at 126 x 65 x 11mm though the gently curving sides help to lessen the bulkiness of this 148g handset.

Beneath the 4.3in screen are the standard four touch sensitive Android buttons, eschewing the recent trend among some other manufacturers to drop the search button. On the sides are a slim volume rocker and micro USB power/sync slot with a 3.5mm headphone jack and power/sleep button on top. As usual, the screen sits just a smidgeon beneath the bezel, which gives it a modicum of protection if it falls on its face.

That touchscreen is a bit of a gem – 4.3in of bright LCD loveliness with a resolution of 540 x 960 pixels, which almost puts it on a par with the latest iPhone’s 640 x 960. Almost, but not quite, though you’d be hard pressed to notice the difference, and it’s clearly still a cut above most Android handsets to appear so far, which have tended to peak at 480 x 800.

The Sensation’s dual core CPU runs at 1.2GHz, with 768MB of RAM. In tests with Android benchmarking app Quadrant, the handset delivered an impressive score of 2374, which is certainly ahead of single core handsets, though it lags a little behind some others such as the Motorola Atrix or the LG Optimus 2X. That said, in practise it feels extremely nippy, and rips through apps without any signs of lag.