We at the El Reg Iberian bureau's Donkey Affairs Department are very much obliged for all your suggestions as to how we might name the latest member of our asinine fold – the splendid jenny seen here* yesterday challenging kittens in baskets for a slice of the 2012 cute creature calendar market: 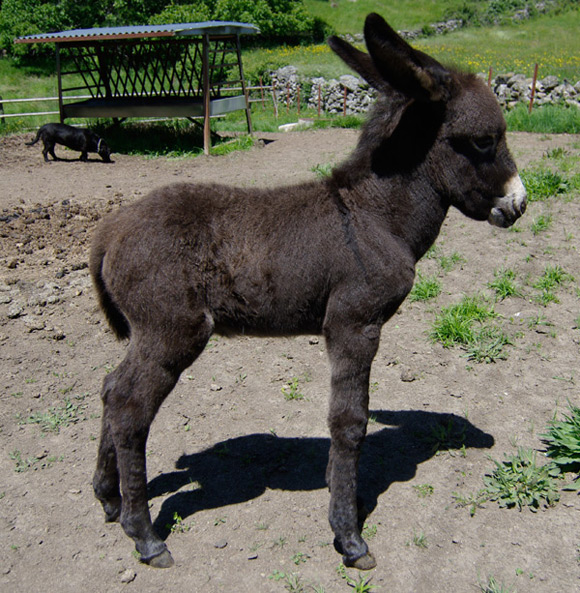 As I explained earlier this week, local custom requires that the name of any foal born during the owner's first year of breeding should begin with "A", and since last year saw the birth of Aladdin, it's time to move on to "B".

Well, based on your nominations, I've now drawn up a shortlist for presentation to the final judging panel: my nine-year-old daughter. Before revealing that, though, I'd like to mention a few which didn't make the cut.

My son reckoned that since Baby B was born on the UK's Spring Bank Holiday, she should be called "Banksy", which is rather good, but falls down on the critical matter of gender. He protested that one of my female mutts is called "Richard", but I countered that this was simply a ruse to allow me to christen three puppies "Punch, Richard and Judy".

(I really was very pleased with myself for this piece of quippery, until I'd spent a month unsuccessfully attempting to explain the joke to the locals.)

"Bob" (an acronym of Beast of Burden) somewhat tickled my fancy, but that's also ruled offside on grounds of gender, unless I deploy a Blackadder defence, and then again it'd be weeks of fruitless explanation to stony-faced Spaniards.

Another decided to geld Alexander the Great's mount, and rename it Bucephala. Unfortunately, in the process, he unwittingly converted the mighty steed into a duck.

My personal fave was Blyskawica, which I gather is Polish for "Lightning", but let's be honest: the chances of anyone round here correctly pronouncing that in the next 20 years are virtually zero.

I'll let you know what our judge decides in due course. ®

*For the record, the dog seen in the background is neither Punch, Richard nor Judy, but their sister Lulú. The name reflects my inability to exceed the comedy moniker 3-arity theoretical limit. See Verity Stob for further discussion of the overstretched and dangerously unstable multiple arity in current English.

Eye-popping scores were thanks to emulators – claim

Man jailed for sex with donkey and horse

22 months' porridge follows having of oats