Updated The London 2012 Olympics is set be a humanoid spectacle of the like never witnessed by the world's population before. Or something. But disturbing information has reached us at Vulture Central that reveals the organisation's entire cultural events database is stored in *gasp* Excel.

A job vacancy currently advertised on the London Organising Committee of the Olympic Games (LOCOG) website is offering a competitive salary to someone who can maintain and report on data held in Microsoft's spreadsheet software.

Now, a small biz with few customer accounts might consider Excel to be fit for purpose. But surely housing an Olympic stadium-sized database on a standalone spreadsheet is bonkers, isn't it? 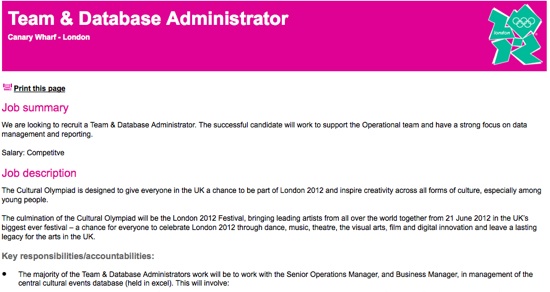 Not so, according to the job ad, which states that the successful applicant will "have a strong focus on data management and reporting". It then goes on to explain that the candidate's key role will involve "management of the central cultural events database (held in excel)."

We've been struggling to see how the two go together. So The Register called LOCOG's press office in the hope of getting an answer.

"It's only for internal use," reasoned the organisation's flack Paul Woodmansey, who tried to dismiss any security concerns.

But surely the database contains hundreds if not thousands of entries - how can LOCOG possibly expect little old Excel to cope?

Woodmansey couldn't immediately provide us with an answer on that one. Nor could he respond to our inquiries about what other databases are housed in Excel by the Cultural Olympiad team. We'll update the story if we hear back.

London 2012 has been billed as "the largest cultural celebration in the history of the modern Olympic and Paralympic Movements," all thanks to the power of Excel we suppose.

Chillingly, the skills required for the job include "experience of managing a large and complex database; especially in establishing and producing automated reports and creating visual outputs of data", as well as "strong IT skills" in "PowerPoint, Excel, Microsoft Word, & Outlook".

Which leaves us wondering if the entire London 2012 programme is powered by Microsoft's Office suite. Shurely shome mishtake? ®

A fiery Olympic torch is pointed gratefully in the direction of Reg reader Alan Benson for the job ad tip.

LOCOG gave us this statement, which seems at odds with the details outlined in the job ad:

"The document you're asking about is just a simple list of information relating to events, it's a tracking tool not a database. ExCel [sic] spreadsheets are a common corporate tool and we use them as and when appropriate," said Woodmansey.

"Where data is of a more sensitive nature then we impose stronger security measures and platforms according to the risk profile. Information security is of the up most importance to LOCOG and we are confident that our data is held securely with the stringent security procedures we have in place."