'Oh my word what an absolute stinker' 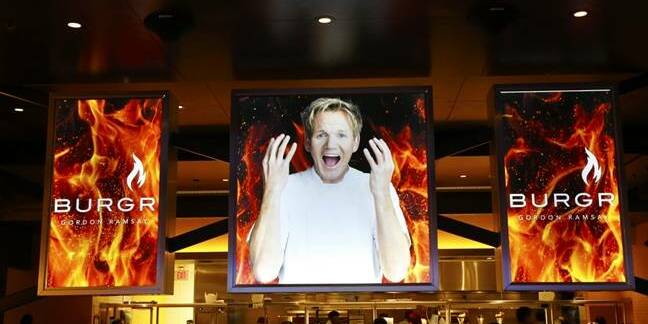 Gobby food-botherer Gordon Ramsay is facing what the Sun describes as his "biggest ever TURKEY", as he makes his movie debut in forthcoming "romcom" Love's Kitchen.

The film won't be released in the UK until 24 June, but it's already been sliced, diced and roasted by internet customers after the makers ill-advisedly decided to serve up this aperitif:

You can see the problem here. As one YouTube commentard puts it: "Well we've watched﻿ the first movie, where's the sequel?"

Another gasps: "Oh my word what an absolute stinker."

Regarding Gordo's first cinematic outing, director James Hacking reckons his performance "had the cast in stitches". Presumably, the producers were similarly wiping tears from their eyes when they came to knock up desserts. Popbitch notes: "Things go from bad to worse for Gordon Ramsay. Contender for worst film of the year? And, how humiliating, they even spelled his name wrong in the credits." ®

'Phantom' menace threatens to down Xbox Live, PSN at Xmas

Comment Risk of causing even more embuggerance is high, we repeat: high

Storm-savaged waterworks having to rebuild from scratch

Bet his mum's going to be livid