The British Board of Film Classification (BBFC) has stamped firmly on the DVD sequel to low-budget movie The Human Centipede, refusing to certify the second installment of director Tom Six's horror series.

The BBFC explains that 2010's The Human Centipede saw "a mad scientist stitch together three victims face-to-bottom" to create the eponymous centipede. Although it was "undoubtedly tasteless and disgusting it was a relatively traditional and conventional horror film" which gained an 18 certificate.

According to the BBFC, The Human Centipede II is "sexually violent, and potentially obscene", and poses "a real, as opposed to a fanciful, risk that harm is likely to be caused to potential viewers". 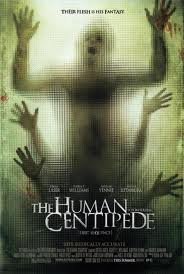 The Board explains: "The principal focus of The Human Centipede II is the sexual arousal of the central character at both the idea and the spectacle of the total degradation, humiliation, mutilation, torture, and murder of his naked victims."

It adds: "There is little attempt to portray any of the victims in the film as anything other than objects to be brutalised, degraded and mutilated for the amusement and arousal of the central character, as well as for the pleasure of the audience."

David Cooke, director of the BBFC, rejected the idea of cutting the film to satisfy the Board. He concluded that "given that the unacceptable content runs throughout the work, cuts are not a viable option in this case and the work is therefore refused a classification".

The Hollywood Reporter notes that despite plenty of net coverage, including this trailer (NSFW), The Human Centipede part one didn't stir up much interest on this side of the Atlantic. The Human Centipede II wasn't presented for British cinema release, and unless the distributor of the DVD launches a successful appeal within six weeks, the movie won't (legally) be coming soon to a small screen near you.

The last film to be refused an 18 cert by the BBFC was Japanese torturefest Grotesque, which evidently lived up to its title. ®