UPDATED Play.com has come under fire for failing to quickly clamp down on an alleged seller of pirated Microsoft software.

An IT consultant advised SME clients to order copies of Office 2003 Professional but says that on arrival it was apparent they were not legit: there was no holographic strip on the COA sticker, it had a fake VBA script and the hologram on the disc was stuck on, not embedded in it.

Despite informing Play.com of the problem, it told the consultant - who asked to remain anonymous - to take up the issue with the vendor DirectSurplus. Six weeks later following a trail of emails, he lost the faint hope that the situation would be resolved.

"I had hoped for a refund but I'm not holding my breath, it seems that [DirectSurplus] knows how to play for time," he told the Reg. "Being a big trader I would have assumed that Play.com would have procedures in place to keep an eye on what is being sold."

"If I can stop the sale of this software than that is a good outcome." 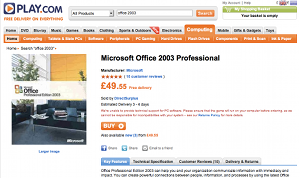 This is exactly what has happened after the Reg contacted Play.com, a spokeswoman for the etailer confirmed.

"The seller's account has been closed while they [Play.com] investigate where the products came from," said the spokeswoman, but she refused to comment further.

In a statement Michala Wardell, head of anti-piracy for Microsoft UK, said it too would look into the matter.

"The damage software pirates inflict on the channel by selling illegal software is huge, whether they’re based in a physical shop or online via auction sites and community marketplaces," she said.

"We’re committed to stamping out software piracy and investigate every report we receive from the public. As the result of our activity, we take action against over 100 resellers each year and will always undergo legal proceedings where necessary."

DirectSurplus did not respond to emails. ®

The consultant has been in touch to confirm that all clients have now been given a refund from DirectSurplus.