Do the shake 'n' chat

Some earlier models had a pressure-sensitive power button which made it all too easy to switch the darn thing off as you pushed it into your ear. The Era has a sliding power switch which is much better. In fact, there’s only one button on the device, and you rarely need that. The Talk button is placed on the corner of the Jawbone, just where it fits into the ear. A double tap on it calls the last number dialled.

The Era comes in a variety of designs

It’s also used to accept, reject and even make calls with voice dialling, but you can achieve the same end, thanks to the motion sensor built in, by tapping the headset’s main body twice. This tapping system worked with absolute reliability. You can also shake the Era. If the headset’s on the table as a call comes in, say, a double-shake answers it before you plonk it in your ear, which is great if you’re otherwise about to miss a call.

A quadruple shake puts the Era into pairing mode if you’re connecting it to another phone. Of course, it would be good if the motion sensor did more. Like, I don’t know, spotting when your head is drooping because you were about to nod off at the wheel, but it’s not that kind of sensor. Well, for now it’s a neat addition.

The Era has an automatic volume level which seems to work well in a variety of circumstances. If you want to change this level you can, by holding down the call button so it cycles the volume up and down, though I’d have preferred a rocker switch. 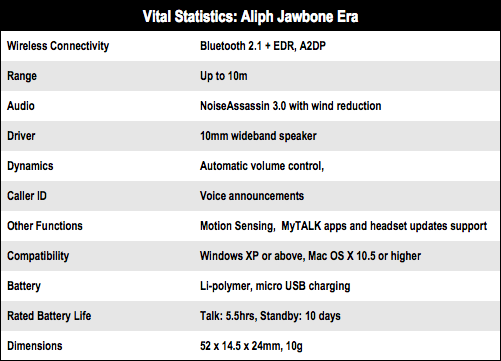 University of London researchers poked around in 'secure' messaging platform, but didn't like what they found