Breaking wave 'big as the USA' spied on Sun's surface

Gnarly plasma rip suited to the Silver Surfer himself

NASA boffins, staring into the Sun with a new space telescope, say they have detected unthinkably enormous waves rolling across the star's hot surface - as if a gigantic breaker of the sort beloved by surfers were scaled up to the size of the United States. 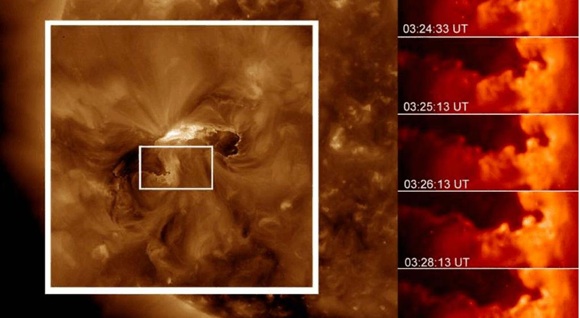 The wave-forming process taking place on the surface of the Sun is the same as that which takes place in the Earth's oceans. It's known as a Kelvin-Helmholtz instability, and involves two different fluids flowing past each other. Off the beach, the air flows past the sea and rapidly turns tiny ripples into mighty swells and breakers: on the surface of the sun, plasma erupts in mighty spouts, so becoming less dense, and then blows across the surface of non-erupted plasma to create waves just like those of Earth - only much, much bigger and hotter.

The pic above, showing the colossal plasma breaks available to any surfer with a really good heatproof space wetsuit and a superpowered forcefield magnet surfboard, was snapped last year by the orbiting Solar Dynamics Observatory (SDO) when it had only just been fired up.

"SDO is not the first solar observatory with high enough visual resolution to be able to see something like this," says Ofman's colleague Barbara Thompson. "But for some reason Kelvin-Helmholtz features are rare. The fact that we spotted something so interesting in some of the first images really shows the strength of SDO."

Ofman and Thompson's paper describing the mighty breaks of the solar corona will be published in the 10 June edition of Astrophysical Journal Letters and can be found online in advance of press here. There's more from NASA on the SDO here. ®