One records pages. The other records speed

Velocity The HTTP Archive – a fledgling effort to record the performance of sites across the interwebs – has merged with the Internet Archive, whose Wayback Machine has long kept a similar record of internet content.

Google's Steve Souders – who founded the HTTP Archive and will continue to run it – announced the merger this morning at the O'Reilly Velocity conference in Santa Clara, California. The ultimate goal of the project is to improve the overall performance of the web by exposing its bottlenecks.

"I've had the idea of doing this for the past four or five years, where I saw that a large number of websites – even the most popular ones – weren't tracking very critical statistics about performance, like size of JavaScript or the number of script requests," Souders said.

Essentially, the HTTP Archive is now a sub-project of the Internet Archive, a not-for-profit based in San Francisco.

Souders also announced that in merging with the Internet Archive, the project has attracted several big name sponsors, including Google and Mozilla as well as New Relic and Strangeloop. New Relic offers an online service for measuring site performance, while Strangeloop provides a service for accelerating website load times.

Souders founded the HTTP Archive this past fall. Using the Webpagetest.org tool created by Google's Patrick Meenan, the project originally crawled about a thousand URLs, and a month later, it expanded to roughly 18,000. With those sponsors behind the project, the new goal is to track the performance of a million of the top sites. 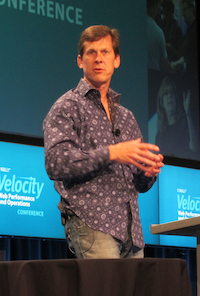 Basically, the project runs sites through the Webtestpage batch API, and the results are shuttled into a MySQL base available to world+dog. The tests track not only how fast pages are, but how they serve their content and how much data is downloaded.

During a lightning demonstration at today's conference – where Souders is co-chair – he compared the performance and makeup of the top 100 websites (by traffic) with the top 1000. With the top 100, for instance, the average page size is about 437KB, while the top 1000 sites average 690KB. In top the 100, 26 per cent of resource requests fail to use caching headers, compared to 40 per cent in the top 1000. And, predictably enough, the top 100 also use significantly less Flash (36 per cent versus 50 per cent).

The HTTP Archive has not yet accepted patches, but it has about six contributors at this point, including Souders and Meenan. You can readily browse data at HTTPArchive.org or you can download data as a MySQL dump.

One of Google's core missions is to improve the speed of the web, from one end to the other. Souders has long been at the forefront of the company's efforts to improve site load times. Previously, he was chief of performance at Yahoo!, where he built the company's YSlow performance tool. ®