Microsoft+HTML: The antidote to iOS and Android

Open...and Shut For a comparatively brief period of time, hardware companies like Nokia and telco operators like AT&T ruled the mobile roost. But as they're now learning – and not doubt stewing over – software is increasingly king in mobile, just like it is on the desktop. The winning strategy in this software-centric world is one that puts software developers first.

Small wonder, then, that Google's open-source Android is on the rise while every other platform, including Apple's iOS, takes a back seat. Over time, the platforms that win will be those that cater to developers, both in terms of making development easy and in terms of making it profitable. Despite Apple's lead, Google looks strong in this area, and the mobile web is not far behind, according to new survey data released as part of the 2011 Developer Economics mobile app developer survey from VisionMobile (warning: PDF).

In this first phase of mobile app development, app developers seem to be seeking ways to extend their existing brands to mobile, and to kick the tires on new modes of engagement with users. This is why they can afford to put off dreams of riches. 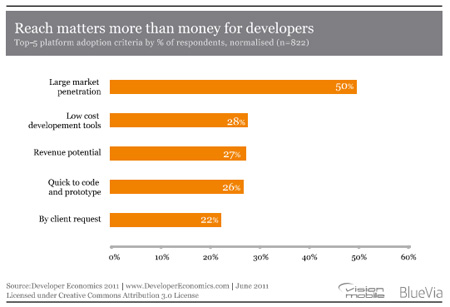 Devs want popular platforms, but not necessarily to make a killing

It's also perhaps why app stores, which come built-in with as much as a 30-per cent margin hit and are pretty poor for helping apps get discovered, are the primary way app developers hope to make money. A significant percentage (45 per cent) sees app stores as their primary go-to-market strategy, and more than 50 per cent think app stores will lead them to more users than other means.

Such is the early euphoria around app stores. Get in the app store, make millions.

It doesn't tend to work that way, however, since outside the top 10 to 25 apps in any given category, visibility within an app store is hard to come by. On the "normal" web, we had Google to facilitate site/app discovery. On the mobile web, the best we have at present is app stores.

One major media brand with whom I spoke recently indicated that it has built hundreds of apps, with very little to show for it, in terms of downloads or money. Its mobile website gets the vast bulk of its traffic, but its one big app gets the bulk of user engagement.

Apparently, it's difficult to get both engagement and discovery in the same place.

And so mobile app developers experiment. But one thing is making life easier for them: Android. According to the VisionMobile survey, only Android among the mobile operating systems has traction across all major markets. This is partly due to Google's freebie approach to Android licensing, which makes its price right for a wide variety of developers, but also because of the investment Google has made in mobile development tools.

Beyond tooling, Android offers deep API access to the home screen, multimedia codecs, and more, unlike iOS (or mobile web), and also facilitates instant publishing instead of the gauntlet of Apple's secretive app approval process. Mobile is too big to be owned by one company's tools or processes: Google is winning precisely because it doesn't need to bottleneck development in its attempts to control how apps are developed and distributed.

The mobile web, by contrast, is as free as Android, or more so, but harder to develop. According to the survey, it ranked sixth in terms of learning curve. Even so, it still ranks third in terms of developer mindshare. 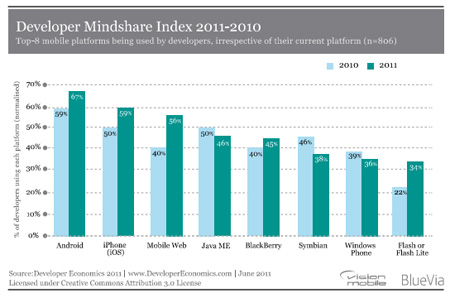 Imagine what would happen if Microsoft married its history of exceptional tooling with HTML5? Some complain that Microsoft is giving up its future by not continuing with Silverlight and other home-grown solutions, but that's foolish talk. Javascript rules app development, and Microsoft is smart to jump on that train.

What Microsoft needs to do now is to lead it, by bringing its tooling to mobile web development. This will only work, however, if Microsoft gives up on the need to directly monetize mobile operating systems and, like Google, finds revenue "higher up the stack."

The mobile app development world is changing rapidly. Yesterday, it was Apple's market and today it is Google's. Tomorrow, it could be the mobile web's market to lose, but a great deal of work would need to be done to enable the web to displace native platforms like Android and iOS. Microsoft might be able to help, but first it needs to figure out its on-again, off-again love affair with the web. ®

Matt Asay is senior vice president of business development at Strobe, a startup that offers an open source framework for building mobile apps. He was formerly chief operating officer of Ubuntu commercial operation Canonical. With more than a decade spent in open source, Asay served as Alfreso's general manager for the Americas and vice president of business development, and he helped put Novell on its open source track. Asay is an emeritus board member of the Open Source Initiative (OSI). His column, Open...and Shut, appears three times a week on The Register.