Can Big Blue survive another century?

Big Blue, which more than any other company defined the modern IT industry, turns 100 today. Such longevity is an accomplishment that most corporations can only aspire to, and there is no guarantee, as IBM's near-death experience in the early 1990s aptly demonstrated, that it will be relevant, much less viable, for the next century.

A hundred years ago, on June 16, 1911, Charles Flint, also known as the "father of trusts" because of rubber and chewing gum conglomerates he created in the late 1890s, did a mashup of a bunch of hardware companies that sold meat scales and cheese slicers, time recording equipment (the punch clock), and Hollerith tabulating and punch-card equipment that had been created to automate the tabulation of statistics for the 1890 US Census. Data from the Census was punched on stiff paper cards by human operators and then run through mechanical tabulators that were a derivative of programmable looms; the Electric Tabulating System, which Herman Hollerith patented after writing his PhD thesis on the machine design at Columbia University, is the foundation of what would eventually become data processing and then turn itself into information technology.

Flint may have put the Computing Tabulating and Recording Company together, but chairman George Fairchild ran it for him and perhaps the most important other founding element that gave what would become IBM longevity was the hiring of Thomas Watson, the top salesman at National Cash Register who left that company under a cloud after being convicted of felony charges relating to dubious business practices against other makers of cash registers. It was Watson's second chance at the big time, and he did not blow it. CTR went public in 1916 and when Fairchild died in 1924, Watson took control of the company and changed its name to International Business Machines. 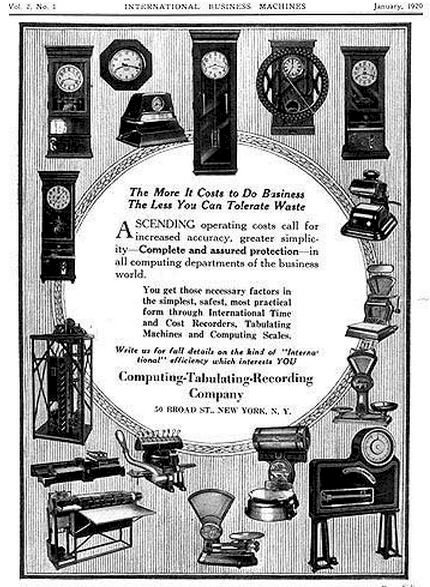 At the time, a meat scale, a time clock, and a card-thwacking tabulator were business machines; so were cash registers, but IBM didn't get into that racket, with Watson already having seen how rough that business could be. IBM got rid of the meat scales from its product line in 1933 and sold off the time clocks in 1958, long after the punch-card tabulators had become its dominant product.

During the Depression and World War II, IBM was the dominant supplier of punch-card equipment used for early government and business accounting systems. Because of predatory technology and pricing practices that yielded IBM profits that even Microsoft and Google cannot match today with their Windows and search/ad-serving monopolies, Big Blue grew to have about 95 percent of that tabulating equipment market. And as the Computer Age dawned, IBM was sued by the Department of Justice on antitrust grounds. The company had always leased its equipment, which gave it tremendous control over pricing, but also gave customers the option of unplugging their gear with 30 days' notice.