The quest for practical hypersonic aircraft (or missiles, if that's what you like) suffered another setback on Monday when the second X-51A hydrocarbon-burning scramjet test vehicle had its engine flame go out above the Pacific and was unable to restart. 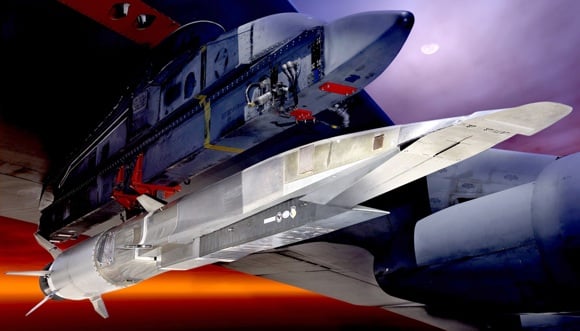 The X-51A is intended to achieve speeds of Mach 6 while burning relatively normal JP-7 hydrocarbon fuel. Previous scramjets have flown at Mach 10, but this required the use of hydrogen fuel, which is expensive and troublesome to handle and requires that any aircraft using it be mainly fuel tanks.

Ordinary ramjets which slow down the air passing through them to subsonic speeds top out between Mach 3 and 4 as drag builds up, hence the need for a supersonic combustion ramjet – a scramjet – to get seriously hypersonic without the use of rockets. Unfortunately it is very difficult to make hydrocarbon burn in a supersonic airflow (traditionally it is described as being like trying to light a match in a hurricane).

The X-51A gets up to fire-up speed, where it is ramming enough air to work, by means of an attached booster rocket. It then gets its jet burning using volatile ethylene, before transitioning to JP-7.

According to a statement from the US Air Force Research Laboratory:

A US Air Force B-52H Stratofortress released the experimental vehicle from an altitude of approximately 50,000 feet. After release the X-51A was initially accelerated by a solid rocket booster to a speed just over Mach 5.

The experimental aircraft's air breathing scramjet engine lit on ethylene and attempted to transition to JP7 fuel operation when the vehicle experienced an inlet un-start.

The hypersonic vehicle attempted to restart and oriented itself to optimize engine start conditions, but was unsuccessful. The vehicle continued in a controlled flight orientation until it flew into the ocean within the test range.

"Obviously we're disappointed and expected better results," said project boss Charlie Brink. "We have attempted two scramjet experiments now where one successfully lit, and one did not."

In the previous X-51A test the scramjet burned successfully for more than two minutes (it was planned to go for five) but the vehicle suffered damage from hot engine exhaust leaking into electronics bays and had to be destroyed while still going at only Mach 5.

If the X-51A boffins can crack hydrocarbon scramjets, the tech might be used initially in so-called "prompt global strike" weapons able to reach around the world very quickly to deliver precision strikes. ICBM rocket stacks can do this already, but the idea is that launching these would cause alarm at the prospect of a nuclear war – whereas the despatch of hypersonic scramjet missiles (or indeed subsonic Tomahawk cruise missiles of bombers which can easily carry nukes) doesn't.

Hypersonic missiles might also be used to punch through heavy air defences to hit difficult targets such as nuclear facilities, command bunkers, major bases or warships etc – one early design might be intended to fit into the weapons bay of a B-2 Stealth bomber.

For those uninterested in weapons, however, there are more intriguing prospects. Brink has previously speculated that it might be possible to get X-51A scramjets to light up at speeds achievable by regular turbojets, raising the prospect of a plane with turbojet and scramjet mode (perhaps integrated together in the fashion of the famous SR-71 Blackbird turbo/ramjet spy plane). Such an aircraft could go from a standing runway start to Mach 6 without benefit of throwaway boosters, and might need only the further addition of rocket mode to become the first true reusable spaceplane.

For now though, Brink and his fellow boffins need to get the X-51A working. They have two more test birds left, with the next flight tentatively set for later this year. ®

Get ready for that deposition tomorrow, Elon
Personal Tech5 Oct 2022 | 2

Well, yeah, when the batteries and power supplies can handle it, too
Science5 Oct 2022 | 22

New language will be official, probably within a couple of months
OSes5 Oct 2022 | 9