And the pig enjoys it...

HP vs Oracle It has never been smooth sailing on the good ship Itanic, but now the processor is at the centre of a poisonous row, one that's as nasty as any I can recall in years of tech reporting.

In case you didn't notice – and you've come to the right place to catch up – HP and Oracle are at loggerheads.

Oracle says Intel has a secret plan to kill off the processor. HP invested billions with Intel in developing the Itanium chips over twenty years, and many customers buy HP systems primarily to run Oracle's software.

According to HP, Oracle's "secret death plan" allegations are malicious and unfounded. HP notes that since buying Sun and starting to compete against HP, Oracle has been playing dirty.

It accuses Oracle of doubling the price of its software for Itanium servers, refusing to fix bugs, and generally making the life of 140,000 HP Oracle users miserable and uncertain.

Nonsense, replies Oracle, when we see you in court, we'll unveil Intel's secret plan to sink the Itanic. "What we know for certain is that Ray Lane and HP's current board members and Leo Apotheker and HP's current management team now know full well that Intel has plans in place to end-of-life of the Itanium microprocessor," says Oracle in a knockabout press release reaction to the lawsuit.

Intel denies this, pointing out the current Itanium roadmap is good as far as 2014, and says it is exploring what succeeds it.

This is a high-stakes row – and one that's personal. After HP gave its CEO Mark Hurd the shove late last year, in a fit of Puritan morality (handing Hurd a $35m parachute to soften the blow), Hurd fell into the arms of his pal Larry Ellison at Oracle.

It is a stretch for anyone to describe Larry Ellison as a Puritan – and the Oracle founder took HP's treatment of his friend as a personal affront. Hurd became co-president at Oracle, and HP alleges he took HP's secrets with him. Much of the legal complaint is redacted (see below), but we're invited to infer that he spilled the beans.

Your first thought might be ... er, what? Didn't the Itanic sink a long time ago? Itanic has been declared dead more times than Rolf Harris. I think I wrote my last obituary here, seven years ago.

But such is the value of the big iron business, built around boutique chips and chipsets, that both HP and Intel consider it worth the investment. 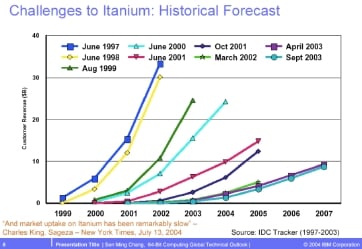 Intel long ago gave up ambitions of large volume sales of Itanic systems – and large volumes (and low prices) was the mantra that kept press and analysts onside as the developers struggled to produce working silicon for years.

Volume economics was what drew HP to partner with Intel in the first place – not just betting that on the eventual end of RISC, but on the ability of big iron vendors to follow the same logic that drove Compaq to commit Alphacide, and SGI to abandon MIPS.

The big iron business remains lucrative because the volume systems really can't compete for certain workloads – see this discussion – so performance is worth paying for.

That might not be true forever, but it has turned out to be true for far longer than the conventional wisdom predicted. When I reported on big iron a decade ago, I had to keep a diagram handy that was almost as complicated as the New York subway map, as a reminder of who did what, and OEMed what to whom. Anyone remember Sinix, for example? That was the Siemens version of Xenix that ran on 80186 processors. Ah. Thought not.

Aide-mémoire: the licensing business in 1998

Now things are much simpler. With the exception of Itanium, it's almost entirely a vertical industry now. The railway junction of licensing arrangements has been replaced by IBM and a tiny handful of rivals developing their own hardware and OS that isn't licensed to anybody.

Yet the Oracle acquisition of Sun represents the biggest challenge to this in a decade. IBM always found itself in a tricky position, selling DB2 to all comers, but also willing to sell IBM servers to businesses who depended on Oracle software.

Oracle is now in the same position of owning a hardware platform in addition to owning industry-leading, portable software. That's quite a nice position to be in: tuning your software to your own hardware gives a system vendor a huge advantage. But Oracle's typically pugilistic outlook will have every Oracle customer looking a bit nervous.

In the interests of the customer, Oracle and HP need to bury that hatchet pretty soon. With so much FUD flying back and forth, the man writing them the cheques may quite understandably place a plague on both their houses – and look for options with more certainty. This row makes great copy for us journalists, but it's very bad for business. You can read the HP complaint below.