Fujitsu bounces back after Japanese tsunami

In March, IT conglomerate Fujitsu was unable and unwilling to make any projections about how its fiscal 2011 would turn out in the wake of the earthquake and tsunami that hit Japan. But the situation has resolved itself enough for Fujitsu's top brass to make some prognostications.

Fujitsu's fiscal 2011 year ends in March 2012, and the company is now forecasting that it will rake in ¥2,100bn ($26.2bn at current exchange rates) in the first half of its fiscal year running from April 1 through September 30. Fujitsu says that despite parts shortages and the shocks to the Japanese economy, it will be able to pull in ¥5bn in operating income and breakeven on net income after taxes. In the first half of fiscal 2010, Fujitsu did ¥2,147.4bn ($26.8bn) in sales, and brought ¥47.1bn in operating income and ¥19bn in net income to the middle and bottom lines.

Fujitsu said that sales of LSI devices, electronic components, and car audio and navigation systems were the businesses most adversely affected by the earthquake and tsunami.

The second half of the fiscal 2011 year is looking so good that Fujitsu thinks it can make up lost ground and actually grow sales and profits despite the dip in the first six months the fiscal year. Specifically, Fujitsu is projecting worldwide sales of ¥4,600bn ($57.4bn), an increase of 1.6 per cent over the prior fiscal year. Operating income will rise by 2.3 per cent to ¥135bn, and net income will rise by 9,1 per cent to ¥60bn if all goes well in the next nine and change months.

"Although the outlook for domestic ICT investments remains uncertain, the risk associated with procurement of raw materials and components has abated," Fujitsu said in a statement.

Fujitsu's Ubiquitous Solutions division – which includes PCs, mobile phones, and "mobilewear" – is expected to do even better this fiscal year. PC and phone sales together will rise by 6.8 percent to ¥900bn ($11.2bn) if all goes according to plan, and the mobile peripherals biz will hopefully bring in ¥260bn ($3.25bn) after falling 8.2 per cent. Add these up, you get ¥1,160bn, up 3.1 per cent. Operating income is expected to be pinched in this division, however, by 33.9 per cent to ¥15bn.

The company's electronic components biz will rose a half point to ¥290bn ($3.62bn) and other parts of the chip operations (including products that get sold to other Fujitsu divisions) will account for another ¥340bn ($4.24bn), up a smidgen from fiscal 2010. Operating margins for the semiconductor biz at Fujitsu will take a 28.5 per cent hit, according to the projections, to ¥15bn

Fujitsu predicts that its Japanese business will rise only 1 per cent to ¥2,970bn ($37.1bn), while sales outside of Japan will rise by 2.7 per cent to ¥1,630bn ($20.3bn). As best as Fujitsu can tell, the Sendai quake and tsunami cost it two points of revenue growth and 20 points of operating income growth. That's about $2bn in revenues and almost all of it was expected to drop to the bottom line, if you drill into the Fujitsu's financial statement (PDF).

Engineering a cloud for engineers

In a separate announcement, Fujitsu has begun testing an application and platform cloud aimed at the engineering departments at big manufacturers that will allow them to run a slew of software on Fujitsu's iron with remote access to the apps and data.

Ironically enough, given the propensity for stupid names in the IT business, Fujitsu is calling it the Engineering Cloud, and the secret sauce that makes it possible to run CAD software, parts databases, and product lifecycle maintenance software remotely is called Remote Virtual Environment Computing, or RVEC, which is a high-speed image compression technology that allows for high-speed display of applications on virtual desktops and, more importantly, means you can use Fujitsu's back-end iron and render your 3D designs on a normal notebook or desktop instead of a high-end and expensive workstation. RVEC was developed by Fujitsu Laboratories and commercialized by Fujitsu's Advanced Technologies division.

Fujitsu is happy to run your CAD, CAE, and CAM software as well as your DMU, PDM, and PLM modules on its cloud. (The first three are computer-aided design, engineering, and manufacturing while the latter three are digital mock up, product data management, and product lifecycle management modules. PLM includes the whole shebang from planning to design to manufacturing to sales and the inevitable support calls.) Or, if you want to be really lazy, Fujitsu will let you use the same stack of software it uses to design and make its own products; the Fujitsu homegrown code allows for design reviews at remote sites and worker telecommuting.

Conceptually, here is what the Engineering Cloud looks like: 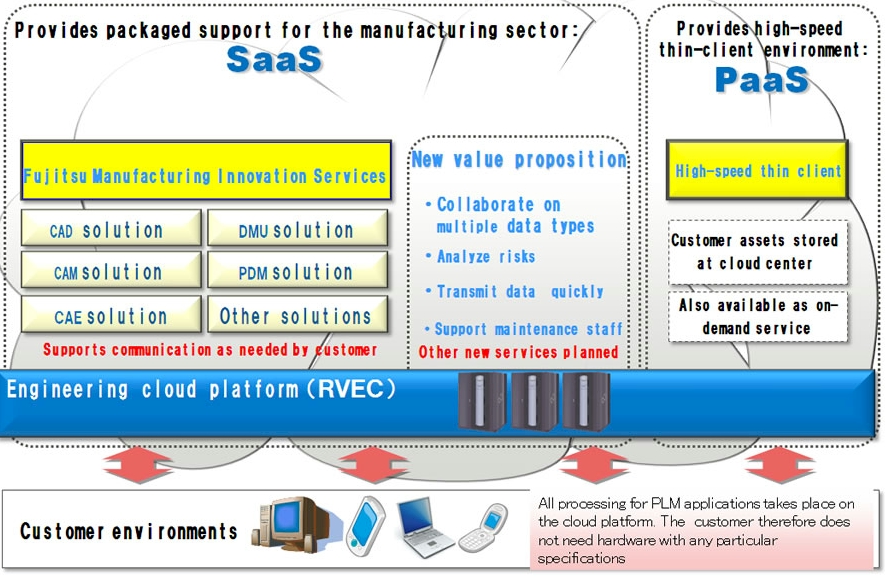 Fujitsu has let one of its customers, JTEKT Corporation, which makes steering systems and driveline components, put the Engineering Cloud through its beta paces. JTEKT needed more sophisticated software than it currently had and did not want to make big capital investments, so it is using Fujitsu's own design and manufacturing control systems to design its new products through the Engineering Cloud.

Fujitsu will start allowing others to buy slices on the Engineering Cloud beginning in October of this year, starting with basic CAD, CAM, and CAE software at first and gradually expanding access. Fujitsu expects to generate ¥10bn ($125m) on the Engineering Cloud over three years. It is not a huge amount of money for Fujitsu, but it is not something to walk away from – particularly if it is profitable. ®