Upstart mega-multicore chip maker Tilera has not yet started sampling its future Tile-Gx 3000 series of server processors, and companies have already locked in orders for the chips.

Ahead of the Structure 2011 conference in San Francisco tomorrow, Tilera is lifting the veil a bit more on its Tile-Gx 3000 series of server chips, which will sport 36, 64, or 100 cores in a single socket. The Gx 3000 series of chips are the second prong in a three-prong attach that Tilera is making on the IT market.

The company already launched its Tile-Gx 8000 series in early May, which are aimed at network equipment makers and which have encryption and zippy I/O capabilities that are not required for server workloads.

The company will eventually offer a Tile-Gx 5000 processors, with hefty compute capabilities aimed at video encoding and streaming workloads.

With the first-generation of Tile64 and second-generation TilePro processors from Tilera, the company had one chip design regardless of the intended workload.

Tilera has not confirmed this – just like it won't confirm that its processor cores are based on a variant of the MIPS architecture. But it seems likely that instead of making three different chip designs with three different numbers of cores, Tilera is doing a deep sort on three different processors.

This would see it tweak clock speeds and deactivating features not needed on chips for specific workloads to aim at the server, streaming, and networking markets. This makes a lot more sense that having nine unique processor designs – three each for the 3000, 5000, and 8000 series.

The Tilera chips, regardless of generation, have the same basic idea: use simple cores, put lots of them on a chip, and link them together using a mesh network.

Each core on the chip has three instruction threads and has 32KB of L1 data cache and 32KB of L1 instruction cache, and also has a 256KB L2 cache; the mesh network is used to link those L1 and L2 caches into a single, coherent L3 cache shared by all the cores on the chip. (So the top-end, 100-core variant of the Tile-Gx chip has 32MB of total cache.)

The Tile-Gx chips have 64-bit processing on their cores, and include floating point math instructions that allow a floating point operating to be done in five cycles instead of hundreds of cycles when done in software.

This is, believe it or not, important for PHP support, Ihab Bishara, director of cloud computing applications at Tilera, tells El Reg.

The Tile-Gx chips might support 64-bit processing, but physical memory addressing on the chips is either 39-bit or 40-bit, which works out to either 512GB or 1TB of maximum main memory. Each core burns less than a half watt of power. 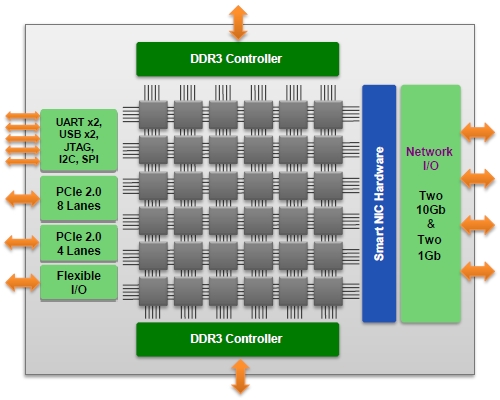 Although the Tile-Gx 8000 network processor had Multistream iMesh Crypto Acelerators, and are able to deliver 40 Gb/sec of bandwidth on cryptographic work and 20 Gb/sec on compression and decompression jobs, these seem to be deactivated on the Tile-Gx 3000 chips for servers.

The server and network processors both have packet processing accelerators, originally called the multicore programmable intelligent packet engine, or mPIPE for short and what Tilera is calling the Smart NIC hardware this time around.

The DDR3 main memory controllers are on the chip, as are PCI-Express and network interfaces, so there is no need for a northbridge or southbridge chipset. You grab this chip, put some memory and peripheral slots on the board, and away you go.

Bishara says that the company is thinking about offering a variant of the Tile-Gx 3000 running at 1.2GHz, but at the moment the plan is to offer 1GHz and 1.5GHz clock speeds.

Next page: Sampling in July
Page: