Euro commissioner tells Facebook it has nowhere to hide

Interview European Commissioner Viviane Reding was in the UK on Monday to warn banks that they will be required to immediately notify customers about data security breaches. The Register visited the Brussels justice minister and vice president at the Commission's London office yesterday lunchtime to learn more about her seemingly personal crusade to make the internet a better place for businesses and consumers.

The current European data protection law was written in 1995 when the internet was beginning to slowly enter the public consciousness. As a result, that legislation was introduced to address the handling of data by television broadcasters, printed publications and other businesses. But the framework is, Reding concedes, no longer fit for the digital age.

"There was no Facebook at that moment," she says.

Reding adds that the idea of obtaining prior informed consent from everybody who "utilises" an individual's data has become problematic now that internet usage has become so widespread. 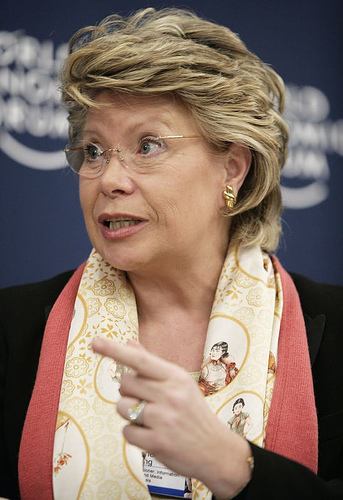 In recent weeks Facebook has come under fire in Europe, after the world's largest social network rolled out its facial recognition technology to countries outside of the US, but switched the feature on by default without telling its users first.

Reding has seen a mood change and says there has been increased concern among citizens within the 27-bloc states in Europe about how their information is being used online.

"People ask: 'What are they doing with my data? What is this thing with photographs? It might be very interesting if I decide that I want this, but it cannot be imposed on me.' There are lots of questions about where we are going in this society."

As we reported earlier this month, it was national authorities in member states, such as the Information Commissioner's Office in the UK, that were tasked with fielding complaints about Facebook's latest privacy gaffe from irate EU citizens.

However Facebook, on a European level, isn't currently breaching data protection law when it makes stealth tweaks to its technology without first informing its users of the change. Reding hopes to close that loophole with the new legislation that's coming in the autumn.

"You cannot hide anymore by saying 'my server is in Honolulu and my other server is in Kiev and...' I don't care," warns the commissioner.

"The law is for everyone who does business on the territory of Europe, whatever the origin of the business might be. So you cannot hide anymore by saying ‘I do not have my headquarters in Europe’."

Of course, convincing Facebook, Google and other US-based companies to adhere to such rules could remain a stumbling block for Brussels.

Reding points to the recent privacy row over Google's Street View data slurp, which got conflicting responses from a variety of countries within the EU.

"The problem was that they got different answers in different member states. In Germany it was declared illegal, in France no one cared. So depending on the different mentality the law was applied in a different way… in future there will be one rule to apply to the whole territory of the European law," she explains.

"The companies will know when they want to come to Europe and target 500 million potential customers they will have to apply the same European law across the states."

But Reding admits that taking legal measures against, for example, the US would be tricky because it obviously isn't a member state.

The EC would still be working within the confines of its own jurisdiction. In other words, a data protection infringement complaint against the US "would be done through the nearest responsible national data protection authority," she says.

"We need rules that are clear and are applied to everyone. If not we take legal measures that we can take."

Next page: Cookies and milk for Santa Claus
Page: