MeeGo and the Great Betrayal Myths of tech history

Nokia's first MeeGo phone is amazing - why did they chuck MeeGo away?

So say Linux fanbois distraught after Stephen Elop turned Nokia's future platform into a rolling skunkworks project. They've started a petition. It's got 287 signatories. "Reality denial" doesn't even begin to sum it up.

The N9 does look quite slick, admittedly, and I won't bet against more MeeGo devices trickling out here and there - maybe even from Nokia. It may even capitalise on that enthusiast market, which may or may not be there for years. But don't look for Nokia to return to it - as Elop said recently, the company's "Plan B" is making sure "Plan A" works.

MeeGo isn't coming back, and to me, looks to have all the makings of a betrayal myth. These are popular with idealistic political groups, usually (but not always) on the Left, for whom Being Right is more important than Winning. I suppose it's been around since Marx's false consciousness (although he never used the phrase); and eventually Being Right becomes the whole point.

It's not about taking power, or making it work, but demonstrating one's splendid ideological purity. Betrayal myths are also popular with technology enthusiasts too - I know, because I've seen several.

In this narrative, a bold and brilliant piece of technology is thwarted not because it isn't good enough, or has failed in the marketplace, but because of (delete where applicable) marketing incompetence, or nefarious interference. If that interference comes from Microsoft, so much the better.

A great example is Digital Equipment Corporation's Shark network computer. I have it on impeccable authority that the Shark was killed off because Compaq had acquired DEC, and feared losing its Windows license. Microsoft played hardball tactics with OEMs on pricing all the time, even IBM found itself on the end of this. Redmond was at its most paranoid and somehow thought a cronky Java terminal was a mortal threat to its entire business. The Shark never even launched.

But the greatest Betrayal Myth of all belongs to OS/2. IBM developed this OS with Microsoft and then decided to go it alone, hoping that a vague strategy built on microkernel buzzword marchitecture - that embraced Apple, Unix and OS/2 - would be unstoppable. It wasn't even coherent.

By 1992 Microsoft had succeeded in replacing almost half of the PCs running DOS with Windows, a GUI that nobody was ecstatic about but most IT buyers thought would eventually improve enough to pass muster. They wanted a GUI to reduce training costs, run the basics, and build Noddy forms-based applications so departments and branch offices could query a database. 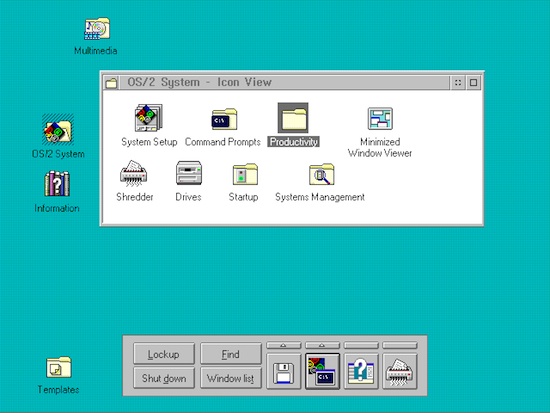 OS/2 succumbed to the inevitable because it didn't have enough OS/2 developers - it juggled DOS and Windows 3.1 quite well, but the OS/2 applications either weren't there, or weren't very good. Once Windows had slithered onto the enterprise desktop, it would take something an order of magnitude better and cheaper to replace it - something a "bit better" wouldn't be enough. The business world outside the IBM camp quite liked where they were, too, and weren't in a hurry to go back and limit their future choices.

After two more versions, OS/2 limped on into 1996, but IBM knew the game was up: OS/2 just wasn't popular enough. And flogging the dead horse was bad for the rest of IBM's business.

If there was the slightest chance that OS/2 had captured, say even 20 per cent desktop share, Big Blue might have kept on investing in it. But it really was too late. Yet to this day there are people who insist it was a terrible betrayal, and if only IBM had marketed it better, the users would have seen the light, and Microsoft's ascent would have been checked.

Next page: Schisms in the Church of Unix™
Page: