The child wizard is going online, come October, in what author JK Rowling promises will be a collaborative creation experience, not just an online game with social media attached.

At first glance Pottermore looks like an online game: players (sorry, readers) will be able enrol at Hogwarts, then mix potions and cast spells to compete in the House Cup. But no one will call it a game: it is instead "an online reading experience", enabling "fans of any age" to "share, participate in, and rediscover stories"... so not just a game with social networking bolted on the side then. 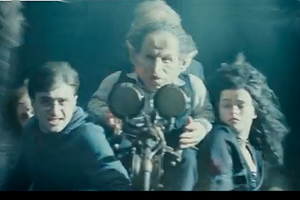 Reg readers rush to be first to compete in the House cup...

Quite how much participation will be allowed isn't clear, but comments and drawings are apparently welcome and readers are expected to share their stories with friends in some sort of electronic book group that only ever lists Harry Potter novels.

Speaking of electronic books, Pottermore will also be the exclusive source for (legitimate) electronic versions of the Harry Potter books, along with JK Rowling's additional notes and details about the world of Harry Potter, which should bring in a decent crowd.

Pottermore will launch in October, and will be free to users. We asked how the site plans to fund itself and were told that financial details aren't being discussed, at least not with us.

There will be the Pottermore Shop, which will start out selling books (both electronic and traditional) but later we're told that it could become "a potential outlet for Sony products and services related to Pottermore".

But working out how to pay for stuff is very Web 1.0, and these days one just accumulates customers and worries about the money later. JK Rowling continues to be infuriatingly pleasant, talking about how to bridge the imaginations of reader and author together, and we've no doubt that Sony will find a way to make money out of her fans when the service launches in October following the beta trial which is already open to a lucky few who can't wait. ®