An Ohio woman is facing a substantial rack of charges after allegedly getting drunk at a wedding reception, assaulting her husband and then spraying cops with breast milk. 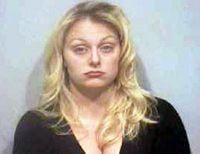 Stephanie Robinette, 30, (pictured) was cuffed in the early hours of Saturday morning outside a banqueting hall in Westville. Delaware County sheriff's deputies responded to a call that she was having a bit of a ding-dong with her other half.

Having allegedly whacked her husband various times, an "intoxicated" Robinette locked herself in their car, and refused to get out when officers moved in with the cuffs.

According to the Columbus Dispatch, Robinette loudly declared she was a breastfeeding mother, "removed her right breast from her dress and began spraying deputies and the car with her breast milk".

Robinette was released "on her own recognizance under the conditions that she have no contact with her husband or other witnesses and that she report to the probation department for a mental-health assessment".

According to Sheriff Walter L Davis III, she may face a further charges, including "harassing a law-enforcement officer with a bodily substance", although that depends on the critical matter of "whether deputies were actually hit with the breast milk".

Robinette is apparently a teacher specialising in "helping children with autism, ADHD and other disorders". ®