Samsung runs to the ITC to seek Apple ban

What, a litigation route left unexplored?

Samsung has filed a complaint with the US International Trade Commission seeking to ban the import of Apple handsets which it claims are in breach of its patents.

The filing relates to the ongoing patent spat between Samsung and Apple. The ITC has the power, if it thinks that a patent is being infringed, to prevent infringing goods being imported into the US, which is important when so little is manufactured there. It rarely exercises that power, but does move faster than the courts, so an ITC complaint has become a standard weapon in the patent-litigator's armoury.

The move follows Apple's amended complaint about Samsung ripping off its designs, which was filed earlier this month. That amendment saw Apple dropping a couple of patent claims, but adding half a dozen more relating to the design and appearance of Samsung products (Trade Dress).

For those having trouble keeping up, Florian Mueller, of FOSS Patents, has created the usual, and useful, diagram showing who is accusing whom of infringing which patents, though he's still busy updating it with the ITC complaint: 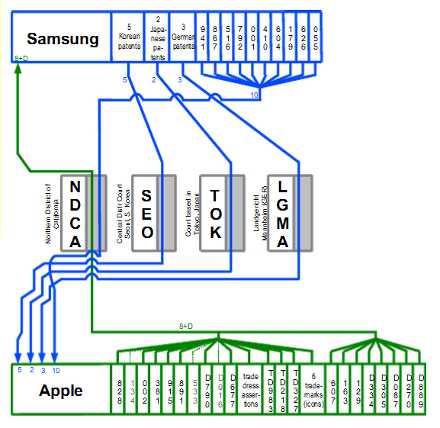 How it was last week, lots more details and updated diagram on the FOSS Patents blog

While this is all going on, Samsung continues to manufacture the chips used in Apple's mobile products, though the rumours are that Apple will be changing suppliers soon. That wouldn't be a big deal to Samsung; chip fabrication is very low margin and Samsung's aspirations go way beyond making bits for other companies.

Those aspirations stretch to Android and Bada smartphones, as well as tablets that bear more than a passing resemblance to Cupertino's offerings. Bada handsets have, so far, escaped Apple's attention, which is surprising, given how much the Bada (locked-down) business model resembles Apple's.

Samsung's ITC complaint is another swipe at Apple, though not a particularly big one. In these battles the strategy seems to be to keep chucking stuff at the opposing side in the hope that some of it sticks, and that you'll be the last one left chucking.

Apple and Samsung will both be chucking stuff for a good while yet. ®