Fast and reliable non-volatile memory of some sort that will replace flash memory is the dream of more than a few semiconductor researchers and chip makers. And boffins at IBM Research in Zurich, Switzerland, think they have come up with a new encoding technique that will allow for multi-level cell (MLC) phase change memory to be commercialized at some point in the not too distant future.

Phase change memory is based on an interesting goop called chalcogenide compounds, which are used in rewriteable CD, DVD, and Blu-Ray disks. These chalcogenide compounds have a polycrystalline state as well as an amorphous state, and the state can be changed with the application of a laser beam or an electric current, both of which heat the material to change it from crystal to amorphous state, allowing for the encoding of the 1s and 0s of binary data in spots on the compound.

The interesting thing about chalcogenide compounds, explains Haris Pozidis, who worked at Philips Research on encoding techniques for rewritable DVDs and Blu-Rays before joining IBM Research in 2001, is that these compounds have a very high contrast between their states – two or three orders of magnitude, in fact, ranging from tens of kilo-ohms to tens of mega-ohms.

This wide range allows, in theory, for data to be stored in multiple phases in the chalcogenide structure, just like multi-level cell (MLC) flash does today. There's only one problem. The resistance in the chalcogenide compound will drift over time, and it does so randomly, and that is a bad, bad thing for storage media to do. To further complicate things, the amorphous state drifts more over time than the crystalline state, since it is trying to get into a crystalline state. So you have two sets of drifts you need to cope with if you want to go multi-level with PCM memory. 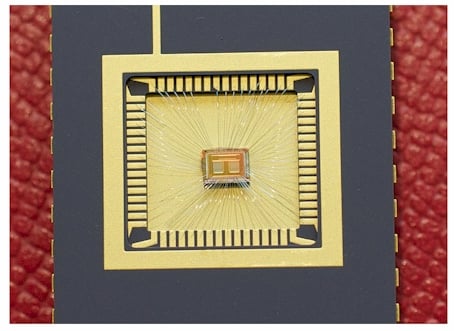 What IBM's boffins have figured out, as you can read in a paper published today (PDF), is that even though the resistance drift is random in PCM crystals, the drift moves in the same general direction in subsets of the PCM memory – the state of chunks of the chalcogenide compound affects the state of the chunks around it, as weather moves through the atmosphere. And the trick that IBM Research has come up with is a clever algorithm that allows for the data to be encoded in the chalcogenide compound and then to read the data in a relative fashion for blocks of data.

"The absolute resistance levels in the chalcogenide can have nothing to do with their original encoded levels," says Pozidis, but the data is still not lost. The bit error rate is below 1 in 10,000 using a two-level cell PCM chip, which is well within the realm of error detection and correction. And, perhaps more importantly, the gap between the amorphous and crystalline levels in the chalcogenide is wide enough that IBM believes it will be able to do three or four levels of encoding. 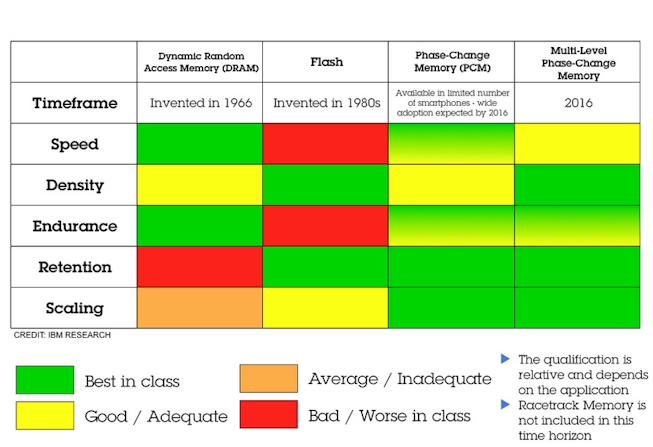 DRAM vs flash vs phase change memory (click to enlarge)

Current MLC flash memory encodes three bits per cell and it is this multi-level encoding that makes it affordable as relatively cheap non-volatile storage. However, consumer flash memory degrades after 3,000 to 5,000 cycles, and flash deteriorates exponentially with the number of read and write cycles. Even enterprise-grade flash memory is only good for 30,000 cycles or so, says Pozidis, and to get that high reliability, you have to sacrifice performance. PCM memory, by contrast, has the ability to handle hundreds of millions of cycles and will be something like two orders of magnitude faster than flash.

There is a bit of research that needs to be done before PCM can be commercialized, of course. But the fact that IBM's boffins have been able to show that a two-level PCM memory chip operating at room temperature could be read after 156 days using an algorithm that was two orders of magnitude more robust than prior decoding methods is a step in the right direction. ®