The problem was that Apple's customer base was really bifurcated into two camps back then - students and consumers who wanted an all-in-one, and looked for value, and the professionals who expected to expand their machines. The Cube was too expensive for the former, and too restrictive for the pros.

Yet the unworldly design created a fiercely loyal fanbase who supported the market for add-ons. A succession of strong CPU upgrades, from Powerlogix, Giga and Sonnet, which took the Cube up to dual 1.7Ghz G4. There were also beefier, Quartz Extreme-capable graphics cards made available. Third parties even manufactured larger cubic cases - these were needed for the fans and cooling systems. 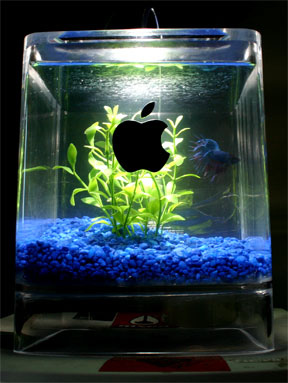 The community lives on and gathers at Cubeowner.com, where the affection for the machines is evident. Do check out the galleries.

In the UK, you can pick one up for anywhere between £100 and £150 on eBay. The expansion options are limited, ruling out USB 2.0 cards for example, and you'll be stuck with a Parallel ATA drive that needs special drivers for drives larger than 120MB. But it will still run Mac OS X 10.4 Tiger well enough to get some work done. The problem is the bus speed is constrained; at 167Mhz it's ten times slower than a 1Ghz CPU, for example.

My first Cube was late adn DOA, and so was the second. Its replacement arrived two months later, spluttered for three weeks and then expired. All were motherboard blow-outs. It was enough to repel anyone but a fanatic from demanding another, so I didn't.

It was 2006 before I picked up a cheap Cube that had been upgraded to a noisy 800Mhz G4 with thanks to Sonnet. But it did great service for a couple of more years. You just had to leave a note on the desk reminding people not to leave their newspaper on the grill …

The Cube remains a quite bonkers, and quite brilliant expression of a particular design - a really outrageous statement. There was no reason it should ever have been cubic, let alone suspended in mid air. It should never have been made - we should be glad it was. ®