One per cent of world's web browsing happens on iPad

The iPad now accounts for over one per cent of worldwide web browsing – and in the US, that figure jumps to 2.1 per cent.

So says the latest Net Applications NetMarketShare report, which also adds that mobile browsing has surpassed 5 per cent worldwide (over 8.2 per cent in the US).

The inexorable upward march of the iPad as a web-access device (data: Net Applications)

Interestingly, the only slight slackening in the iPad's increasing web use was in February of this year – presumably when some portion of 'Padders who received their "magical and revolutionary" fondleslabs as holiday gifts cooled to their allure.

On Monday, it will be exactly 14 months since the iPad went on sale in the States. Whatever you may think of Apple's groundbreaking, market-leading tablet, capturing 2.1 per cent of US web-browsing activity in that short of a time is impressive, indeed. 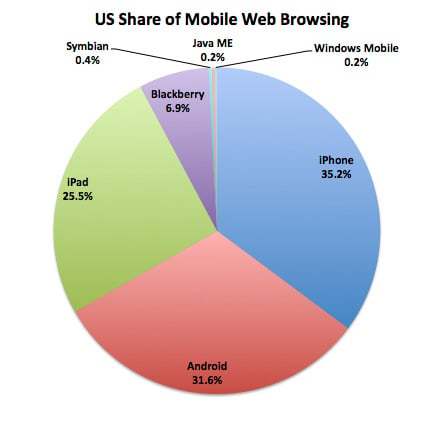 The NetMarketShare report also notes that the iPad and iPhone, taken together, are within shouting distance of commanding two-thirds of all US mobile web browsing. Android devices – smartphones and tablets – account for 31.6 per cent of mobile browsing in the States, and RIM's BeleagueredBerry hangs on for just under 7 per cent.

As might be expected, Symbian, Java ME, and Windows Mobile devices are mere dust in the wind.

Microsoft's embarassing last-place tie, however, won't last long – not if you believe the projections of IDC's prognosticators. According to their crystal ball, sales of Windows Phone–based devices will outpace those of both iOS and BlackBerry devices by 2015, and surely web-browsing stats will reflect that growth.

That is, if the IDC's augury is anywhere near correct. Here at The Reg, we're not holding our breath.

There is one forecast, however, on which we'd be willing to bet a goodly portion of our meager pay envelope: in coming NetMarketShare reports, you'll see a continuing rise of the iPad as a web-access device, and the rise of mobile web browsing in general.

Actually, that's such a "Well, duh!" prediction that it may explain said meagerness of said pay envelope. ®