Review The first major update to Apple's Mac operating system in some five years is nearly ready, and what has been removed is as significant as its improvements. Mac OS X 10.7, known informally as Lion, continues the trend of removing "legacy" components and technologies from OS X with a zeal that would leave Microsoft quivering in terror. 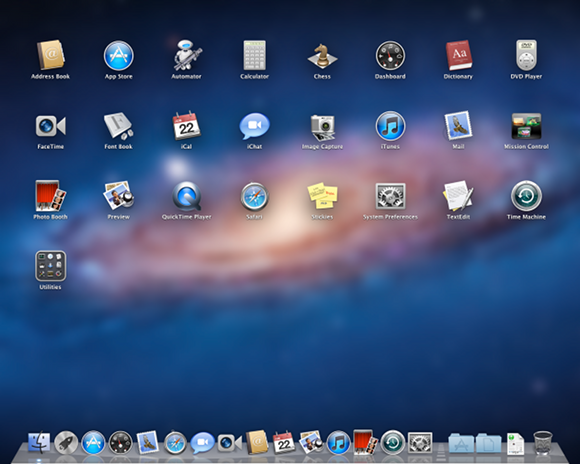 If you're a fondleslab addict and folders are too complicated, there's Launchpad (click to enlarge)

Mac OS X development has slowed markedly since the release of OS X 10.4 – "Tiger" – in 2004. Two years later, 10.5, "Leopard", was the most recent major update. 2008's "Snow Leopard", version 10.6, was as its name suggests a relatively minor release, which mainly just dropped support for PowerPC machines. This means that Lion is OS X's first big overhaul since 2006.

Hardware-wise, Lion flips the finger to early Intel adopters. 10.7 won't install or run on the original Core Duo and Core Solo Macs from 2006. The first Intel Macs – note the shorter name; they're not "Macintoshes" any more – were the Core Duo iMac, MacBook, MacBook Pro and Mac mini, together with the Core Solo Mac mini. All have 32-bit CPUs, while Lion requires a 64-bit capable chip – a Core 2 Duo or better. So if you were one of the first intrepid fanboys to move from a PowerPC Macintosh to a new Intel Mac, you're screwed. It is possible to replace the Core-1-series CPU in some Macintel models with a Core 2, but this still leaves you with 32-bit firmware, so it won't help.

You also need at least 2GB of RAM just to install Lion, but that's not such a big deal – it's a sensible and affordable upgrade. Speaking of upgrades, in our testing, only upgrading from Snow Leopard worked; trying to upgrade a 10.5 system yielded a "not supported" message and a bare-metal install started but failed at the first reboot. Lion's distribution is a little odd, too. It will only be available for download from the Mac App Store – not on physical media. It's a hefty 4GB disk image, too, so you'll need a fast, unmetered connection.

Even if you sensibly held out for one of the later, faster Intel Mac models, you're in trouble if you're still hanging on to any older PowerPC apps. Lion also drops Rosetta, the instruction-set-translation system from Transitive Technologies that hitherto allowed Intel-powered Macs to run PowerPC applications. This may not seem like a major drawback, but it means you can't run the last version of Microsoft Office with the classic interface – Office 2004, equivalent to Office 2003 for Windows. Office 2008 and 2011 are options, but many – your humble correspondent included – hate the "ribbon" interface. At least the permanent Mac OS menu bar means that, unlike hapless Windows users, Mac sufferers from Office's Fluent interface still have the familiar old-fashioned menus available.

(Another alternative would be to install CrossOver and run a classic version of Windows Office under that.)

Adobe Photoshop and Creative Suite users face a very pricey upgrade bill for Intel-native versions, too. The ancient OS-X-native Internet Explorer 5.5 will no longer run, either. Less visibly, Appletalk support is completely gone as well: it's TCP/IP or the highway with Lion.