Java has been dropped, too, but there is slightly more hope for Java users: the first time you try to run a Java app, the OS will offer to download and install one for you. This is helpful but not ideal – so, for instance, to offer an entirely hypothetical scenario, if you had just installed LibreOffice and written a few hundred words of copy, you wouldn't be able to save your work if no JVM had been installed when the program was launched. Apparently the file-saving functionality is one of the Java bits and LibreOffice needs a restart for saving to work. Who knew?

To be fair, it's not all bad news. There's a lot to like in Lion. Several components have received iOS-inspired makeovers: Mail and Address Book have new, very iPad-like user interfaces, while the Launchpad is an iOS-style easy app launcher that reminded us of the Dashboard in Ubuntu's controversial Unity desktop. Many apps now have a Full Screen view, hiding the Dock and menu bar – finally bringing something akin to Windows-style maximisation to the Mac. Similarly, windows can now be resized from any edge or corner, just like on Windows. Dashboard, Exposé and Spaces have merged into Mission Control, offering an instant overview of all running apps and applets on all desktops. 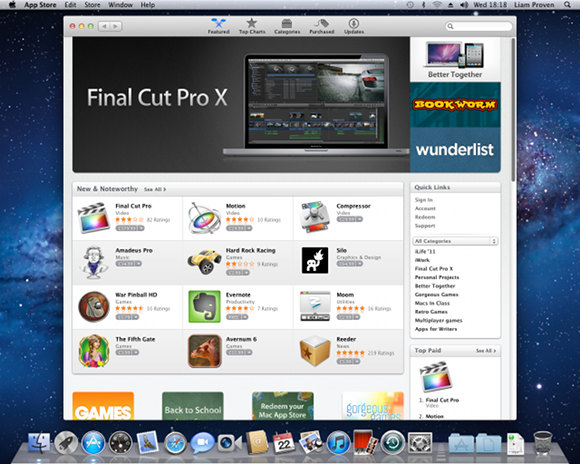 The App Store came to the Mac late in Snow Leopard's life, but now it's centre stage (click to enlarge)

Did you want to save that? Too bad, it's done!

Mac-using techies with very long memories – especially back to Apple's co-marketing agreement with DEC back in January 1988 – might find that the new Versions feature reminds them of VAX/VMS. Related to the Time Machine invisible background backup system that appeared in Leopard, Versions allows you to go back to any earlier version of any document. This will be a boon when coupled with Lion-compliant app's continuous file saving. This new feature means that you needn't keep interrupting your work to save – but we predict that it will cause much cursing the first time it overwrites a good file when you didn't actually want to save. 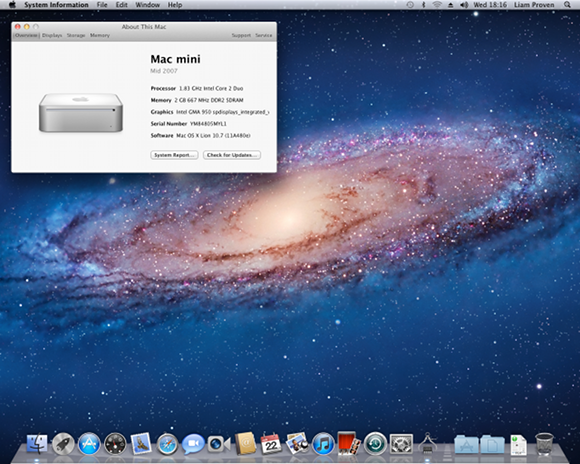 For the first time since 1991, your Mac knows what model it is. System 7 nostalgics rejoice (click to enlarge)

The last big-ticket item is Resume. This probably stems from development work on the early, non-multitasking iPhones, where apps had to save all state when you switched away from them so that they could pick up seamlessly when reopened. On the Mac, Resume means that when you shut down or reboot, the Mac reopens next time precisely where it was, with the same programs, windows and documents open in the same places.

From our quick look at Developer Preview 4, Lion offers improved integration, too. For instance, logging into Gmail with Safari popped-up a message offering to automatically link Mail, Address Book, iCal and iChat with our Google account. You don't get this if you use a third-party browser such as Firefox or Chrome, of course, although we tested these and they worked flawlessly – even with Java applets, once the JVM was installed.

Mac OS X 10.7 is an impressive upgrade, well worth the wait. For new users, it's a shoo-in – especially for Windows-based iOS users. Existing Mac users looking to upgrade face quite a few drawbacks, though.

Going completely legacy-free could be an expensive exercise – but it will be worth it if there are Intel-native or Universal versions of all your core applications.

If you can, though, it looks worth it. Leopard was good enough for us to surrender Classic Mode and give up our handful of Classic Mac software, but Snow Leopard didn't tempt us away from PowerPC. Lion looks to be the release that will.