When you live in a glass house – like IBM does, both metaphorically and literally – you don't throw stones. So when Oracle suddenly pulled the plug on future software development for the Itanium processor back in March, Big Blue didn't say squat about the situation. But the company's top brass have been taking pot-shots at the Itanium chip in recent weeks, and that was in preparation for an IBM assault on the Itanium base code-named "Project Breakfree".

IBM's Migration Factory, where it moves customers off competitors' iron and onto its own System x, Power Systems, or mainframe iron has migrated more than 6,500 customers since it was founded five years ago. Across all platforms, the first quarter of this year was pretty good, with 845 competitive replacements; about 391 of those deals came out of Oracle/Sun accounts and another 164 came out of Hewlett-Packard accounts, according to documents relating to the Breakfree program that IBM launched with partners in late June.

The Power platform accounted for 210 competitive replacements in the first quarter and generated over $200m in revenues; about 60 per cent of those deals came out of Oracle/Sun accounts, and the other 40 per cent came from HP accounts. Those Power Systems competitive replacements have been averaging a little less than $1m a pop on hardware, software, and services per deal. While IBM has not presented any figures for deals where System z mainframe or System x or BladeCenter x64 gear was done, it is safe to bet that mainframe deals (when there are any) involve larger sums of money and x64 server deals smaller sums.

The Breakfree effort is obviously not just about replacing an HP-UX, OpenVMS, or NonStop system from HP with an AIX or Linux operating system running on a Power6-based server. Rather, it is a full-court press and if the first quarter is any guide, there will be plenty of deals involving x64-based systems with some or no system software changing. Sometimes companies want to change operating systems, sometimes the whole system software stack. IBM wants to be flexible about it, and not because Sam Palmisano, IBM's CEO and chairman, is a nice guy but because this is what it takes to win a deal.

According to a presentation made to channel partners and industry analysts by Peter McCaffrey, director of marketing for competitive initiatives in IBM's Systems and Technology Group, the Itanium platform has been marginalized by Microsoft, Red Hat, and now Oracle ceasing development on the chip. HP's lawsuit against Oracle, launched two weeks ago, contends that Oracle has gone further and is refusing to properly support its software on current Itanium-based Integrity machines from HP and is at the same time offering customers its own hardware at below cost prices to encourage them to move off HP iron.

IBM says that it has identified over 10,000 HP Integrity server accounts, which have over $8bn worth of Itanium iron installed that has a book value of zero because of the controversy. (That latter bit is marketing hyperbole, of course.) Of those 10,000 accounts, IBM reckons about 30 per cent of them run SAP application software, which seems to be yet another reason why new HP president and CEO Leo Apotheker might be tempted to buy his former German employer. Big Blue believes that these 10,000 HP-UX accounts represent about $2.8bn in annual Unix system spending, presumably including servers, upgrades, systems software, storage, and services. IBM's cross-brand sales teams are reviewing these 10,000 accounts right now and prioritizing them and then figuring out who the top ten prospects are in each sales region.

Once identified, IBM is taking a three-prong attack on the HP base, a process that starts with what IBM calls an HP Itanium Meltdown Assessment.

The first way IBM wants to work its way into the hearts, minds, and pocketbooks of HP-UX shops is by using the soft touch. And that is to remind HP-UX accounts that Big Blue also provides its own database and middleware software, and that its Migration Factory staff know how to help companies make such a move while staying on HP iron and the HP-UX operating system.

In mid-May, Inhi Suh, vice president of IBM's database product strategy, put out a statement saying that IBM intended to support Itanium for "years to come". IBM is not providing any guarantees for how long it will develop on the Itanium processor, of course. "The DB2 development organization continues to build the next release of DB2 in support of the HP-UX on Itanium platform and has no plans for any change in that platform’s tier one status," Suh wrote.

So customers that want to stay on HP-UX and ride the Itanium roadmap to its end – or at least to 2016 or so when the future "Kittson" processors will be awaiting a follow-on that has yet to be announced and may never be – can do that by switching databases now.

Suh also reminded HP-UX customers that HP-UX on Itanium is one of the key platforms supported by IBM's DB2 database, that HP-UX on Itanium support is launched right alongside AIX on Power, Solaris on Sparc, Windows on x64, and Linux on Power and x64 as each release comes out. This is in contrast with the past three releases of Oracle's database (10g R2, 11g R1, and 11g R2), which came out first on Linux and then shipped several months later on HP-UX. Suh also wanted to point out that the next release of the DB2 variant for Linux, Unix, and Windows (as distinct from the DB2 database management systems for IBM's z/OS and OS/400 platforms) will support HP-UX on Itanium on day one.

Some customers annoyed by Oracle's going cold on Itanium will not want to switch their software stack, but will be willing to move hardware platforms and therefore secure support from Oracle in this fashion. This is prong two, and it involves using the Migration Factory to so a hardware swap, the kind of thing Big Blue has been doing for years and presumably HP and Oracle/Sun are doing, too, but they don't talk about it (which is idiotic if they are doing lots of competitive takeouts).

The third prong is the full-on Breakfree offering, where customers are encouraged to switch away from Oracle databases as well as HP-UX iron at the same time. This Breakfree deal includes Power7-based systems, DB2 databases, as well as optional WebSphere middleware and Tivoli systems management and security tools, all configured and run through the migration factory with "Breakfree solution pricing applied". Here's what one deal looks like: 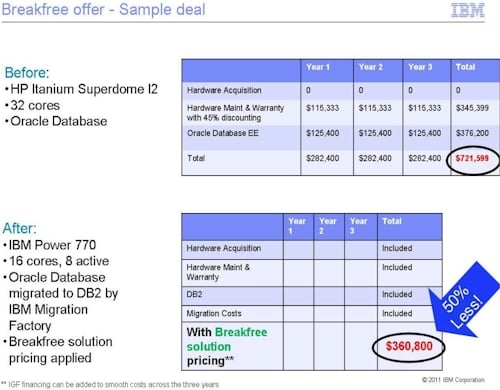 The details on the Breakfree bundle are a bit sketchy, but it includes a free pre-sales business value and migration assessment, and for those who go through with the deal, education and migration services rolled into the discounted offering. In the above configuration, IBM is comparing the cost of supporting an existing Oracle database on HP-UX on a 32-core Superdome Itanium 2 Integrity server (not the current generation of machines using the "Tukwila" Itanium 9300 chips) for three years to the cost of buying and supporting a 16-core Power 770 machine, including the database migration to DB2 from Oracle. Even with a 45 per cent discount on hardware maintenance and warranty from HP, IBM says the Breakfree system will cost half as much as the support on the HP/Oracle stack.

It looks like IBM had better be sure it isn't selling its Power Systems and DB2 databases below cost or it might find itself in a lawsuit in California with HP, too. California has laws against such behavior.

To further sweeten the deal and cut of the acquisition costs of the Breakfree configurations and spread them over multiple years, Big Blue's Global Financing arm is offering a "sweep the floor" deal to buy back the Integrity iron, plus zero per cent financing on software and zero rate or low rate financing on the hardware (it depends on the country). And finally, Global Financing is offering deferred payments until 2012 to those who take IBM up on the Breakfree deal.

You could argue that IBM owes Oracle co-founder and CEO, Larry Ellison, a sales commission for every Breakfree deal it does. ®