Top brasshats set to be booted out of Whitehall

Analysis Last week, the Defence Secretary announced the publication of the Levene report into the way the UK Ministry of Defence is run: and Dr Fox stated that he agrees with all the recommendations it makes. The MoD has formally announced that it "will publish a blueprint setting out all the major changes the Department is embarked on later this year".

So, what's on the cards down at the MoD?

In outline, the three single services – and their chiefs – will lose massively in power and influence: and there will be an attempt to create a Joint Forces Command which will be the first step towards a future in which the services actually expect to work together as routine, rather than only when forced to or when there's a war on. 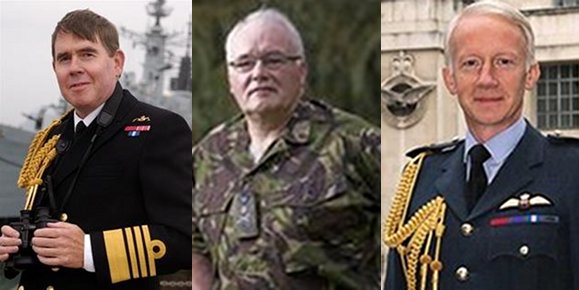 The Levene report says that the First Sea Lord, the Chief of the General Staff and the Chief of the Air Staff – heads of the navy, army and air force respectively – should be booted out of MoD Main Building on Whitehall and made to go and sit in their service headquarters outside London. They will be allowed to leave behind only a small number of staff types to fight their Service's corner in the corridors of power, and these rump contingents will be headed by mere two-star officers: a rear-admiral, a major-general and an air vice-marshal. If they commanded combat formations, such officers would be important indeed – the entire British Army can put into the field only one or two formations worthy of being commanded by a major-general – but among the mandarins of Whitehall, many of whom are equivalent to three-, four- and even five-star military officers, they will be insignificant small fry.

We would expect the single Service staffs currently situated in the Head Office to move to their Service Headquarters. But while the focus of the Service Chiefs' time and effort will be on their Command they will need to maintain office space and a support staff in London. This should be headed at two-star level ...

Then, the three Chiefs will no longer sit on the Defence Board, either. They will be sitting out in the countryside while the real decisions get made in London. Only the Chief of Defence Staff, the UK's top uniformed officer, will be in the room: and he may care nothing for the interests of those services which he didn't grow up in.

That might not matter. Long ago, Mrs Thatcher and her then Defence minister John Nott planned to gut the Royal Navy. Before the cuts could go into effect, Argentina invaded the Falklands. The RAF could do almost nothing about the situation: the Army very little*. The navy won the war and massively boosted Mrs Thatcher's political career in the process. Shortly thereafter, perhaps recognising that she and Nott might have been at fault, Mrs Thatcher instituted the principle which remains in force to this day: that a Service chief has direct access straight to the Prime Minister – going over the heads not just of the Chief of Defence Staff, but over the entire Defence ministerial team as well.

In effect, then, it won't matter that the Chiefs are shut out of the room: if they don't like the decisions that are made, they can go over the Defence Secretary's head straight to Number 10.

But perhaps not any more from this autumn. Levene writes:

The Service Chiefs also have a long history of advising the Prime Minister on the employment of their Service. While ordinarily they report and tender advice through the CDS to the Defence Secretary, the freedom to represent advice as guardians of their Service direct to the Prime Minister as a last resort was formalised in the 1984 White Paper, 'The Central Organisation of Defence'. A mechanism for the Prime Minister and Service Chiefs to meet when required to discuss the health and morale of their Service seems entirely reasonable. However, we would not expect this to cut across the clear lines of accountability that we have set out for the management of the Department, with corporate decision making lying with the new Defence Board and CDS’s position as the Defence Secretary's and the Government's principal military advisor strengthened.

So the Chiefs are well and truly shut out, perhaps. And more: to keep them out of mischief, they are to be given work. Normally, all the units and operations of a given Service are handled day-to-day by the relevant Commander in Chief, a four-star officer under the four-star head of that Service. But now these three C-in-Cs (CinCs Fleet, Land and Strike) are to disappear, meaning that the boss himself will have a lovely big HQ with maps and counters to move about and so forth to keep him occupied.

Increasing the role of the Service Chiefs in the running of the Commands would also reduce the requirement for a separate 4 star Commander-in-Chief. Removing the post would streamline top-level decision-making, simplify lines of accountability for Service outputs, remove duplication between the posts and also provide impetus to the leaning of the senior leadership. We have considered the effect on talent management and potential operational considerations but, on balance, we have concluded that these posts should be removed. We recognise that the Service Chiefs would still need to delegate some of the running of the Command (not least given their continuing representational duties). The Department should look to do this within the current structure at 3 star level.

There are certainly plenty of spare brass hats kicking about in the hierarchy to help, so that shouldn't be too hard.