Cops in southwest London have identified a skull found in the Richmond garden of TV star Sir David Attenborough as that of an 1879 murder victim. 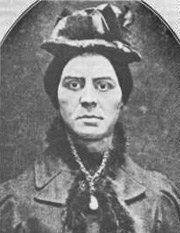 The skull was discovered last year during excavations at the rear of the former Hole in the Wall pub in Park Road, close to where Julia Martha Thomas was killed by her Irish-born maid Kate Webster (pictured) in what became known as the "Barnes mystery".

Webster, who had a history of drunkeness and a long criminal record, murdered the widowed Thomas at No 2 Vine Cottages, Park Road, on 22 March 1879, following an argument.

In a "fit of rage", she pushed the 55-year-old down the stairs. Acting Detective Inspector David Bolton, who led the investigation, explained: "Realising she had injured her, she proceeded to strangle her to stop her from screaming and getting her [Webster] in trouble. Webster decided to do away with the body and used a razor to chop off the head. Having decapitated her, she used a razor, a meat saw and a carving knife to cut the body up. The dismembered body was put into a copper laundry vessel and she proceeded to boil up the body parts of Mrs Thomas."

Webster subsequently disposed of most of the body in the Thames, where it was discovered close to Barnes Bridge. Some of the remains ended up as a free meal to local kids, according to the Daily Mail, but what happened to the head remained a mystery.

The West London Coroner, Alison Thompson, yesterday formally recognised the skull as belonging to Thomas, and "recorded a verdict of unlawful killing and the cause of death as asphyxiation and head injury".

Chief Superintendent Clive Chalk, Borough Commander of Richmond, said: "This is a fascinating case and a good example of how good old-fashioned detective work, historical records and technological advances came together to solve the 'Barnes mystery'."

As for Kate Webster's fate, she fled to Ireland, but was arrested and returned to England. She was tried at the Old Bailey, found guilty of murder and hanged at Wandsworth Prison on 29 July 1879. ®