Facebook has unveiled a group chat tool, a new design for its overall chat interface, and, yes, a video calling service based on Skype.

"Video calling is the first example of what we think of as a great social app," Facebook chief executive Mark Zuckerberg said during a press event at the company's Palo Alto, California, headquarters. "The integration that we've done could not have been done without the great social infrastructure we've rolled out over the last five years," he said.

The group chat tool is based on Facebook's existing Groups setup, which is now used by about 50 per cent of all Facebookers, according to Zuckerberg. The new design includes a browser sidebar that provides quick access to those you chat with most, and it offers a "call" button that launches the video service.

The video service requires a plug-in, but you can place a call to your Facebook friends that will then send them a notice pointing them to the plug-in. The service does not offer group video calling, but Zuckerberg indicated that this will eventually be rolled into the service.

The service cannot be used to call existing off-Facebook Skype clients – or vice versa. But Skype product manager Mike Barnes tells The Register that the two companies will eventually provide such off-Facebook calling. 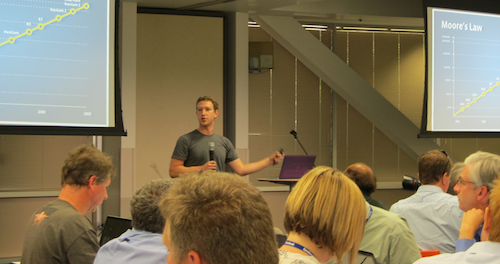 Facebook has already started to roll the new tools across its site, and "millions" of users. Bates says that the video service will reach about one per cent of users on Wednesday. According to Skype CEO Tony Bates, the two companies have been working on the video service for the past six months.

In late June, Zuckerberg told a Seattle audience that Facebook would unveil something "awesome" today, and last week, Techcrunch reported that this would involve integrating the social network with the Skype VoIP service, which is now owned by Microsoft. Redmond is a Facebook investor and longtime Facebook partner. Microsoft's Bing underpins search on Facebook, and Facebook may be used to personalized your results on Bing. Microsoft announced in May it's buying Skype for $8.5bn.®

Update: This story has been updated with additional information from Facebook's press event.