GNC's goal is twofold: simplify the programming model and make the GPU core more capable of participating in what AMD, ARM, Microsoft and others call "heterogenous computing" – that is, distributing work among CPU, GPU, and more-specialized cores, which each element contributing what it does best.

The major change in the GCN's shader array is that it includes what AMD calls the compute unit (CU), and what Demers calls the "cellular basis" of the design. A CU takes over the chores of the previous architecture's VLIW-based SIMD (single-instruction-stream, multiple-data-stream) elements.

VLIW is gone. The GCN's CUs are fundamentally vector cores containing multiple SIMD structures, programmed in a per-lane basis. Four groups of wavefronts are run in each CU core per cycle. "It's a vector core where each lane is programmed independently, and there's a single stream coming in and broadcast all over those things," Demers says. "You program it in a scalar way, and it operates in a vector mode."

Simply put, a CU might be considered to be a smart VLIW/SIMD structure. In the VLIW world, you'd have to rely on the compiler to load the core correctly and efficiently. If something changes in the instruction stream, the VLIW is too dumb to modify its workload, and pipes might remain unfilled with data, wasting cycles.

As you might guess, that makes VLIW perfectly fine for graphics, where predictability is high, but crappy for compute, where dependencies can and do change at a moment's notice – even if that "moment" is a billionth of a second. Although the CU must work wavefront by wavefront – it's not an out-of-order mind-reader – it can move workloads around radically more nimbly than VLIW.

This versatility is the – pardon the pun – core reason for the GCN: AMD is planning for a heterogeneous world, in which GPUs are increasingly equal compute partners with CPUs. 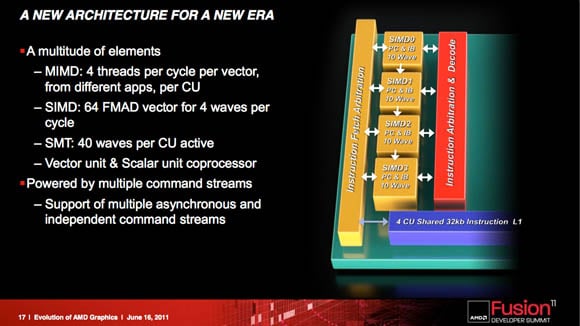 Is the GCN and its CUs a MIMD, SIMD, or SMT architecture? Yes (click to enlarge)

The CUs can work in virtual space, Demers says, and they'll support the x86 64-bit virtual address space – more on that later. Also, the CUs are supported by a much larger L1 data cache than was in the previous architecture. The cache also has what Demers calls "a significant amount of bandwidth," and is supported by its own control system.

Previous AMD GPU architectures have had what the company has called "hidden fixed-function with hidden state". As examples of such fixed functions, Demers identifies "program counter advancements, and things such as that – limited functionality."

Help with the housekeeping

The GCN moves beyond hidden fixed functions with the addition of a fully observable scalar processor, which frees the CUs from simple tasks – quick math functions, for example, and housekeeping. "It's a processor in its own right," says Demers, and it's responsible for such common code as branching code and common pointers. A vector unit could also handle such common-code chores, but as Demers explains: "The scalar coprocessor helps it out, and offloads those capabilities."

Observability of the CUs and the scalar processor, and support for the x86 virtual space – along with the fact that, Demers says, "you can load the PC from memory or from a register and do all kinds of math" – opens up such C++ features as virtual functions, recursions, and x86 dynamic linked libraries. "All of these become a native thing that this guy can support," he says. 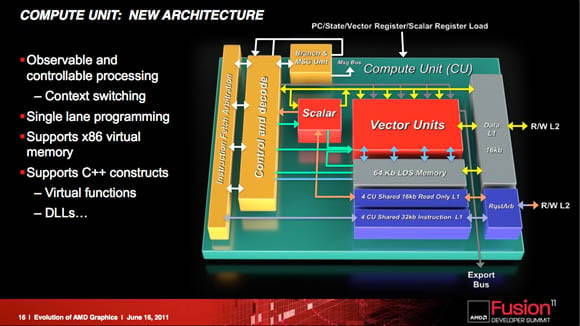 The processing capability boosted by a host of compute units is all well and good, but only if they can be fed the right data to munch on at the right time. To this end, the GCN architecture allows for multiple command streams from multiple applications, each with different priorities and the ability to reserve CUs for themselves.

As an example of this capability, Demers suggests the interaction of your operating system's user interface and an app. "You can have your GUI running at one priority level, and you can set that high, and you can guarantee some amount of compute units always available for it. But then your big background applications for transcode can be running at a lower priority," he says, and you will still have a great quality of service [QoS] – there's no more skipping mouse when you do a big job, because the big job is running in a separate queue."

Next page: Thanks for the (shared) memory
Page:
Corrections Send us news
72 Comments