ANONYMOUS: Behind the mask, inside the Hivemind

Where and who are the Anons? Everywhere and everyone

On a frigidly cold morning in early 2008, two dozen complete strangers arranged to meet for the first time. They had travelled from all over the metro area, some taking over two hours to reach their destination. Coffee and doughnuts were sacrificed to the ritual of placing online handles to faces. The first meeting of the Edmonton chapter of Project Chanology had officially begun.

Similar meetings were taking place around the world. Thousands of individuals (known as Anons) in dozens of cities were about to do something unprecedented. Anonymous was about to manifest in the real world in order to protest the sins of Scientology. No leaders arranged, organised or coordinated this endeavour.

Despite this lack of hierarchy, the protests were a spectacular success. From London protests that filled entire city blocks to the lone brave protester handing out leaflets on the streets of Tokyo, Anonymous had burst into the public consciousness with an unforgettable message: the internet is here. 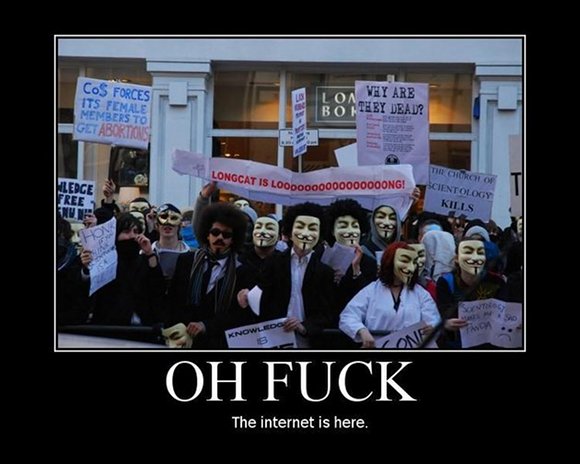 But who is Anonymous? Explanations aren't easy; you can't pigeonhole Anonymous. Every definition ever attempted – including this one – is in some way wrong. This is in part because Anonymous can't agree among its members what Anonymous is or whom Anonymous comprises.

Anonymous isn't a group, or a club. It isn't an organisation, a religion, cult or ideology. Anonymous is the fairly vague and nebulous realisation of an idea. Exactly which idea is a source of continual debate.

Anon3 )) The Oldfags1 are most likely the ones starting everything up, they've been doing it the longest. I like the Oldfags, I like listening to the stories about old raids and whatnot. They are kind of digital hipsters though, but that's needed to keep all the new people from taking over. A lot of the Oldfags lurk other boards, mostly because /b/ 2 has become a hangout for Newfags.

Anons argue all the time about who qualifies as an Anonymous. Since there is no formal membership, there is no membership roster. Some Anons believe that anyone who has ever posted anonymously anywhere is an Anon. Others have a more restrictive view.

Anon3 )) Anyone can be apart of Anonymous, and they need to be ready to tolerate the good with the bad, because there is going to be more bad then good. So I guess you could say that anyone who self identifies could be considered anon.

Anon3 )) You have to do raids to apart of anon. Raiding is a big part of being anon; they are the frontline and the part that everyone notices.

Anon3 )) This group isn't really a group at all, it's a bunch of people who feel strongly about something enough to do something about it

Lacking a formalised membership requirement, or method of identifying other Anons, those who identify themselves as Anonymous will often be accepted as such.

Anonymous traces its origins to internet image boards. There are a few different origin stories, but all have a similar theme. Depending on the whims of the moment, the image board admins would alternately enforce, allow or ban posting anonymously.

It was quickly discovered that if you allow (or enforce) anonymous posting, getting people to follow any sort of rules is functionally impossible. It was here that Anonymous began.

Anonymous is that part in all of us that wants to break the rules, defy social conventions, indulge a secret passion or get a rise out of someone. Anonymous is the expression of our desire for lulz.

Anon2 )) I never really "started" with anonymous, more so just drifted into it as a lot of interesting people, interesting ideas are around the people involved. Over the years you "become" part of it.

Anonymous rapidly evolved to become the symbolic representation of the ability to say what you want to say, when you want to say it, to whomever you wished to address.

Anon2 )) There's a reason this IRC network has lasted as long as it has with the opers we have here :p

Anon2 )) Our policy on no logging, no data storing, freedom and flow of ideas would mean anyone is welcome though unless they cause harm to the network.

This is a reincarnation of an old idea, one that has recurred with great frequency in our species history. From slaves fighting for freedom or the fragmentation of religions to "no taxation without representation", there have always been people willing to agitate, gather en masse, and even die for the right to speak their piece.

Anon3 )) If they shut down the servers Anonymous hangs out on they'll just move somewhere else and people will pick right back up where they left off.

Anon3 )) If the government tries to "censor" us, I think you will see wide spread rioting.

Anon3 )) People like their free speech: even if you don't like what they say, they have the right to say it.

Anon3 )) I would be out bitching, sending angry letters, fucking shit up on the interment. I'd be pissed.

Anon3 )) That's not to say that the "basement dwellers" will be as pissed as myself to make their voices heard, but we're talking about a site that gets millions of visits a day.

Anon3 )) To me it is worth fighting for. I'm truthfully sick of what seems to be a "company controlled" government that we have today.

Anon3 )) I would be willing to die for freedom of speech.

Anon3 )) I think they'd be right there with me.

Anon3 )) Protests are a little hard to get going, but if people are pissed enough they'll show.

Hippie culture brought a pacifistic element to this idea. Hacker culture took a similar theme and combined it with the desire to explore the boundaries of new technologies. Around the turn of the millennium, the freedom to speak one's mind took on a more activist edge.

This concept of "hacktivism" was embraced by some Anons and rejected by others. Some see hacktivism as the only method by which individuals can have their voices heard. For others, it's a bridge too far. Regardless of where individual Anons may draw the line, hacktivism has become the public face of Anonymous.

Next page: Obeying the rules is up to you
Page:
Corrections Send us news
193 Comments