An artist who surreptitiously installed a video art installation on computers in two New York Apple Stores says that four US Secret Service agents awakened him on Thursday morning, produced a search warrant, then confiscated his couputers and other kit. 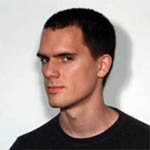 The project that got Brooklyn, New York, media artist Kyle McDonald in trouble with the Feds had two phases, according to Mashable, which broke the story.

This June, McDonald covertly installed software he had written onto Macs at New York's West 14th Street and SoHo Apple Stores. The background app snapped pictures using the Macs' FaceTime or FaceTime HD cameras, and transmitted those images back to MacDonald's server.

McDonald then assembled the images of shoppers' faces into a photo and video work he entitled – reasonably enough – "People Staring at Computers":

Phase two of McDonald's Apple Store messabout was this Sunday, when he installed a different app on Macs in those same stores. This time, when shoppers looked at a Mac they saw a picture of themselves, followed by pictures of other shoppers who were, as the earlier work's title suggested, staring at computers.

Interestingly, shoppers just carried on with their shopping, and the installation just kept running with no interference. That is, until the Apple mothership sussed out that something was amiss. As Mashable tells it:

Over the course of the project, McDonald set up roughly 100 Apple store computers to call his servers every minute. That's a lot of network traffic, and he learned that Apple monitors traffic in its stores when he received a photo from a Cupertino computer of what appeared to be an Apple technician. The technician had apparently traced the traffic to the site McDonald used to upload the program to Apple Store computers — and installed it himself.

Even after seeing that Cupertinian technician, McDonald wasn't overly concerned. That is, until those four Secret Service agents – presumably from the Electronic Crimes Task Force – woke him up on Thursday morn with their computer-fraud warrant. After their visit, the agents left with two of McDonald's computers, his iPod, and two flash drives.

Ominously, the agents told McDonald that Apple would contact him on their own.

The 25-year-old McDonald, who has a masters in electronic arts, is not a lightweight flake. For example, he warmed up for "People Staring at Computers" by creating a video entitled "Autotimelapse", using software that he described as "Headless openFrameworks app plus cron job takes one frame every minute, over about 3 days." You can find a collection of 94 of his videos – demos, how-tos, and artworks – on his Vimeo page.

For the in-store photography in "People Staring" – the parts that were shot with a handheld camera, not an on-Mac webcam – he obtained the appropriate permissions from Apple's security gaurds and from the shoppers whom he photographed. And should someone in the online photo collection ask for their photo to be removed, he'll do so.

McDonald also didn't make available online the code that he used to shoot and transmit the webcam photos, as he does with most of his artworks and research projects. As Mashable notes, "he recognized that the technology behind his art project could be used for less benign purposes."

Despite the computer-fraud warrant and the confiscation of his computer equipment, McDonald doesn't think he's broken any laws. "My main thought," he told Mashable, "is that I'd rather spend my time and money making new work rather than dealing with a computer fraud investigation."

And dealing with that inevitable call from Apple. ®