Open...and Shut We've certainly entered the silly season of Silicon Valley tech valuations, but one company strikes me as not richly valued enough: Facebook. You can argue about the company's privacy policies, its data hoarding policies, its choice of that ugly blue but one thing seems beyond doubt: Facebook is worth at least as much as Google. And probably more.

How can it not be?

As web traffic soars, driven increasingly by mobile, Facebook is gaining disproportionately to its peers, including Google. Facebook is the first website to top one trillion page views per month, leading some to speculate that Facebook could be the first company valued at over $1tb.

That number may be high, but Facebook's current valuation of roughly $75bn is almost certainly too low. Google is currently valued at roughly $175bn, essentially for its search/ad business. Facebook's own ad revenue doesn't yet approach Google's, but its potential is arguably bigger.

"Social", not algorithms, is the basis for all human commerce. Facebook owns social. That's got to be really, really big. At least as big as Google, and arguably bigger.

The difference, of course, is that Facebook (as well as Google and other savvy web giants) has a lock on user data. While the company courts developers to build on its platform, it's not reliant on open-source developers contributing to that core platform. It just needs users - currently 750 million of them - "Liking" and posting and clicking on ads to generate the $1bn-plus in sales that are driving it toward a massive IPO.

Facebook isn't in the clear just yet. Consumers have shown a high degree of fickleness toward social networks (Friendster, anyone? MySpace?), and could dump Facebook tomorrow, potentially even for Google's promising Google+ endeavor.

But this is unlikely. As BusinessWeek points out, Facebook hasn't made the same missteps that MySpace, for example, did. The company hasn't tried to be all things to all people. It has focused on building a solid, open platform that developers want to build on. Just like Microsoft before it. 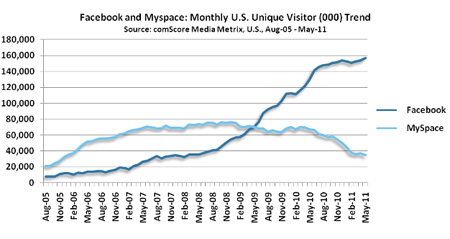 As with Microsoft, it's telling that if you talk with a cross-section of venture capitalists, the majority will confirm that their portfolio companies are increasingly building on Facebook. Zynga was an early success story on Facebook, but there will be many others. Because that's where the users are. Or, rather, that's where users' social interactions are.

I once thought even a $10bn valuation for Facebook was overpriced. I was wrong.

Facebook has something that inflated valuations like GroupOn's don't have: it solves a fundamental human need (communication/interaction), while finding ways to monetize this need at the periphery. So long as the company doesn't become a breeding ground for bloated product mismanagement, it's going to be worth at least as much as Google. And probably a lot more. ®

Matt Asay is senior vice president of business development at Strobe, a startup that offers an open source framework for building mobile apps. He was formerly chief operating officer of Ubuntu commercial operation Canonical. With more than a decade spent in open source, Asay served as Alfresco's general manager for the Americas and vice president of business development, and he helped put Novell on its open source track. Asay is an emeritus board member of the Open Source Initiative (OSI). His column, Open...and Shut, appears twice times a week on The Register.