Updated Unix systems may not be all the rage that they were two decades ago, but in nearly eight out of 10 data centers based on them, their use is either holding steady or increasing.

That's the assessment of a recent survey of the HP, IBM, and Oracle Unix customer bases by Gabriel Consulting Group, which has just finished up its fifth annual slicing and dicing of Unix customer sentiments.

Unix systems have successfully colonized their neighborhoods in the data centers of the world, and are resisting the onslaught of Windows and Linux on those systems' relatively inexpensive x64 iron. The Unix colonists are also resisting all of the marketing muscle and money that is dedicated to evicting them.

The GCG survey, which ran in late 2010 and early 2011, solicited input from places where Unix techies like to hang out; 306 shops responded to the full survey and the results were normalized for the HP, IBM, and Oracle installed bases.

If you are a Unix expert, the recession was probably a bit unnerving, as CFOs and CIOs ran around with machetes trying to cut costs anywhere they could, with Unix systems being a target in the same way that proprietary mini and mainframe systems once were – and continue to be.

According to the Unix shops polled by GCG, Unix usage was indeed on the wane in 2007, as the recession in the United States was building up a good head of steam. As you can see from the chart below, some shops slammed on the brakes while others kept on increasing.

By 2008 and 2009, GCG's data from surveys of Unix customers showed the declines slowing, but the share of customers who were boosting their budgets also slowed. Now, in the 2010-2011 survey, 45 per cent of Unix shops say they are increasing their spending, and a third say they are holding steady. 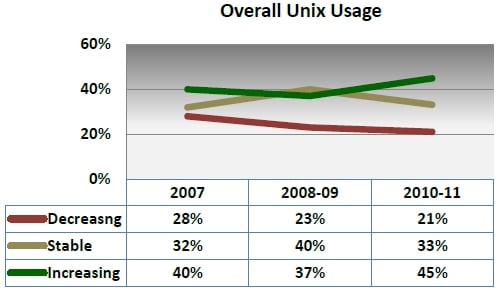 Unix system spending is on the rise

While the Unix-system makers have always competed fiercely against each other, each are notoriously difficult to completely dislodge. The tendency to have two, three, or more Unix variants running in the data center has changed only slightly in the past five years, and in this case, the change has been toward more diversity, not less, among Unix shops. 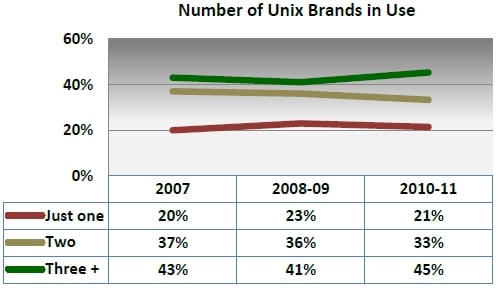 Perhaps Unix should have been called Multiplix?

This is all the more striking as the Unix market collapsed down to three vendors, and server consolidation reduced the number of Unix footprints, says Dan Olds, the principal at GCG and a Reg contributor. Only a fifth of the Unix customers surveyed by GCG say they have only one Unix variant running in their shops, and a third say that have two different Unixes and nearly half have three or more.

The simple fact is that companies choose a particular Unix to run specific jobs based on the technical characteristics of the platforms and the skills their employees have – the same reasons that all applications end up on a particular OS. Or don't.

Despite the similarities between Unix and various commercial-grade Linuxes (meaning they have third-party tech support from reputable companies), Linux has not become a replacement for Unix.

"Enterprise customers who have both commercial Unix and Linux see value in both systems," Olds explains. "While they're increasingly relying on Linux, they don't see it as a complete substitute for commercial Unix systems at this point. They see commercial Unix platforms as a bit better choice for mission-critical workloads, particularly those that require vertical scalability combined with high availability.

"These are also customers who see a lot of value in vendor support," he says, "and on this score they believe that the commercial Unix vendors have more to offer than what they can get with Linux."

About 60 per cent of the shops surveyed that have both Unix and Linux workloads say Unix is the better choice for hosting some applications and databases, and about the same proportion of shops that have both in their data centers say Linux is not as technically sophisticated as their Unixes. A little more than half of those polled who have both Linux and Unix running in their data centers said Unix is more reliable and has better availability than Linux.

So depending on how you ask the question, you get a slightly different answer. Perhaps the situation is more like this: There are some shops that want to migrate away from Unix for economic, skills, or technical reasons, but at least some of them don't expect to actually do the migration.

What would be interesting to learn now, of course, is how shops that have Unix, Linux, Windows, and proprietary minis or mainframes running their applications think these different platforms stack up. ®

An earlier version of this article included a chart and analysis that raised a few somewhat problematical points. Unfortunately, since the author is incommunicado on Monday here in the US, currently winging his way 'cross the continent, we've elided that portion until we can ascertain complete accuracy.