Cloud9 – a startup offering developers an IDE that runs entirely on the web – has announced that its creation now plugs directly into the Node.js service run by Node chief steward Joyent.

You can now build a Node app, debug it, and deploy it without leaving the the web-based IDE.

Unveiled this past March, Cloud9 is an online IDE (integrated development environment) designed specifically for building applications with JavaScript, including Node, the event-driven, server-side development platform based on Google's V8 JavaScript engine.

Previously, you could build and debug Node apps with Cloud9, but you couldn't deploy – at least not directly. Now, you can deploy straight to Joyent's No.de service, a hosted version of the Node.js platform.

"Before, you needed to push to Github and then push to somewhere else. It was very cumbersome," Cloud9 CEO and cofounder Ruben Daniels tells The Register. "Now, you don't even have to go to [Joyent's No.de] to create your own account. You can press a button in Cloud9 and create an account right there."

Joyent is home to Ryan Dahl, the creator of Node.js. In addition to offering the No.de service, the San Francisco startup uses Node.js to help drive its Amazon EC2–like "infrastructure cloud" service. The platform is also a part of Joyent's SDC6 software, which lets ISPs and other outfits build their own infrastructure clouds.

In addition to Node and JavaScript, the Cloud9 IDE handles HTML, CSS, and – to a lesser degree – CoffeeScript, Ruby, and PHP. The company is now developing a version of its IDE for Python, and this version, currently in "preview mode", will integrate with Google's App Engine. 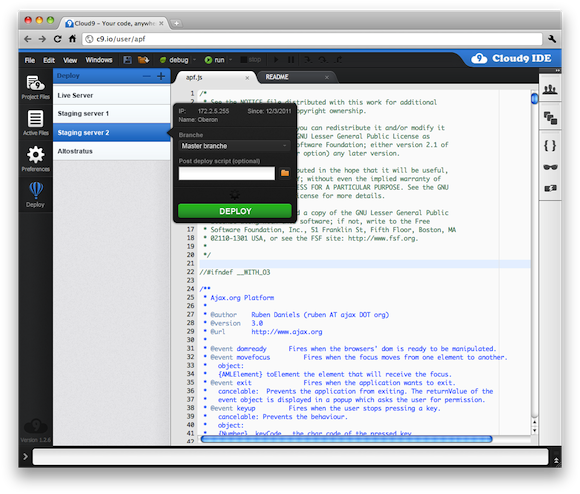 Cloud9's board advisor is JavaScript inventor and Mozilla CTO Brenden Eich. Though Mozilla was previously developing its own "cloud-based" IDE – known as "Bespin" and then "Skywriter" – the open source outfit has now put its weight behind Cloud9. "They basically gave us the community that used to work on Bespin," Daniels says.

The Bespin project has been rolled into the open source editor at the heart of Cloud9, known as Ace. The editor is available on GitHub under the MPL, GPL, and LGPL licenses, and according to Daniels it's now used by such names as VMware, Salesforce.com, and Facebook.

Cloud9 carries a $15 a month subscription fee, but a free, limited version is also available. ®