'We run 50 per cent of everything'

VMware has unveiled the latest version of its vSphere hypervisor – vSphere 5 – along with a suite of additional technologies for building what the world insists on calling "infrastructure clouds".

Speaking this morning at a press event in San Francisco, VMware boss Paul Maritz said that according to various industry analysts, VMware virtual machines are about six months away from running 50 per cent of the world's server workloads – and naturally, he's intent of capturing the remaining fifty percent. "This industry is accelerating," he said. "We've put into vSphere 5 many features ... that directly speak to that acceleration, that will [help us] get the other 50 per cent of workloads."

They don't really speak to the acceleration. That's just business lingo. But the basic message here is that VMware wants to run every application on the planet.

Speaking with The Register after today's event, VMware vice president Bogomil Balkansky said that Maritz's 50 per cent figure applied only to existing VMware customers, not the entire world. But this only underlines the extent of the company's ambitions. VMware sees itself and the server world at large as one in the same.

As part of its mission, the company aims to make vSphere the foundation for a stack that underpins countless Amazon EC2–like infrastructure clouds – abstracted pools of processing power, storage, and networking that can scale up as needed. "How do we take existing applications and new applications and move them to a world of more-efficiently automated infrastructure?" Maritz said. "To do that, you really have to pool together all of the things that go into an infrastructure to deliver a solution that allows people to really automate."

The new Cloud Infrastructure suite – which CTO Steve Herrod called the "largest coordinated release of software" the company has ever made – is designed to drive public clouds from the likes of Verizon, Bluelock, and Colt, but it's also meant for use inside private data centers. You heard that pitch before.

One million ops a second

Due to arrive in the third quarter of 2011, vSphere 5 will juggle virtual machines with up to one terabyte of memory and 32 (virtual) CPUs, each able to handle over 36Gb/sec of network traffic a second and about one million I/O operations a second. On vSphere 4, VMs were limited to 8 virtual CPUs, 256GB of memory, 30Gb/sec network traffic, and 300,000 I/O operations a second. "These virtual machines are now bigger than many of the physical machines that people have historically had," Herrod said.

The new vSphere will also offer what the company calls profile-driven storage and distributed resource scheduling. These tools let you map your disparate storage systems together into logical entities. "You might have a collection of different Fibre Channel arrays, maybe a NAS array, an iSCSI array, and we let you place them into pools," said CTO Herrod.

Separately, a new "auto deploy" tool is designed to let you instantly deploy new hosts, grabbing the image and configuration settings it needs to fit in with an existing pool of servers. "The end result is that you can quickly and easily add new horsepower to the system – in a very agressive manner," Herrod said.

With the new hypervisor, VMware has also introduced a new licensing structure. The product is now licensed according to the number of processors it runs on and the amount of virtual memory it uses. There are no restrictions on the number of cores per processor or the physical RAM per host. The company has also reduced the number of subscription types from six to five, in an effort to make its licensing "easier to understand".

VMware's new vCenter Site Recovery Manager – also version 5 – offers what VMware calls "vSphere replication", which lets you move data and virtual machines between physical data center sites without using array-based physical storage. "We've brought replication into the software, and you can use the network to copy between sites," Herrod said. "You can protect more of your workloads at lower cost."

With the new vShield, Herrod explained, you can segment data into separate zones that are isolated from one another. "We can take governance and compliance certifications – whether they be PCI [the payment card industry data-security standard] or some of the various certifications in the banking or healthcare spaces – and recognize how that applies to data in the system. We can now look into the system and recognize the data that's targeted by one of these certifications or governance requirements."

And the update to vCloud Director – version 1.5 – offers what are called "linked clones". This lets you more quickly deploy your virtual machines. "When two virtual machines are quite similar, we build them off a single disk, and only when they start to diverge do you start to allocate storage and start to do things differently for VM number two," Herrod said. 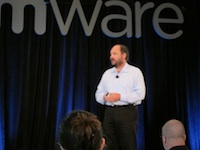 VMware senior vice president and general manager Raghu Raghuram tells The Register that since the platform's launch in October of last year, "hundreds" of enterprises have adopted vCloud Director, though he could not say how many of these companies have actually deployed the platform in live data centers. He said about 4,000 enterprises are still using Lab Manager, the precursor to vCloud Director.

On Tuesday, VMware also introduced a vSphere storage appliance, a new software product that pools storage from run-of-the-mill servers. It's designed for small and medium sized businesses that don't have the dollars or the expertise to run more-advanced storage technologies. "The idea is to bring drives together and create the illusion of shared storage," Herrod said. ®