Pastafarians worldwide are celebrating after a landmark Austrian decision in favour of the Church of the Flying Spaghetti Monster paved the way for its recognition as a full-fat religion.

Until now, worshippers of His Noodly Appendages have until now been nothing more than a marginal cult battling the dark forces of Intelligent Design.

However, thanks to one Niko Alm, Pastafarianism looks set to take its rightful place on the roster of bona fide churches. 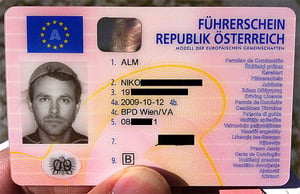 Alm, 35, has won the right to appear on an Austrian driving licence wearing a spaghetti strainer on his head. His epic battle to don this "religious headgear" began in 2008 when, as a protest against that fact that "officials had no problem with Muslim women wearing headscarves when posing for their driving licence and passport pictures", he rolled up to a Vienna ID office wearing a sieve.

According to the BBC, the powers that be weren't too impressed with Alm's claim the strainer was "a requirement of his religion" and asked him to provide a doctor's confirmation that he was "psychologically fit" to drive. The Pastafarian claims the office then sat on his approved licence for a couple of years, as a way of punishing him for his beliefs.

Not so, claimed Manfred Reinthaler, a Vienna police spokesman. He insisted "the licence has been ready since October 2009 – it was not collected, that's all there is to it".

Reinthaler also clarified: "The photo was not approved on religious grounds. The only criterion for photos in driving licence applications is that the whole face must be visible."

This report, however, claims the office really did attempt to persecute the Church of the Flying Spaghetti Monster. It says: "An anonymous clerk who sympathised with Alm's approach to the issue rang him after finding out that his request was granted – 21 months after he applied for a new licence."

Whatever the truth, it's clear the strainer-on-head ruling is a major victory for Pastafarians. Alm says his next move is to ask the Austrian culture ministry to officially recognise his faith, and he'll doubtless have the support of his Spanish fellow believers, who are themselves launching a second attempt to get onto the local "Register of Religious Bodies".

The Spanish Ministry of Justice rather churlishly showed the first petition the door, citing the "total lack of tenets of faith ... which are the basis of any religion".

This brush-off, the defiant crusaders claim, is merely proof that the ministry is possessed by the spirit of the Invisible Pink Unicorn. ®