A team of US researchers has fashioned a memory circuit that may provide an electronic bridge between man and machine.

"Our memory device is soft and pliable, and functions extremely well in wet environments – similar to the human brain," one of the researchers, Michael Dickey, said when announcing the breakthrough.

To construct the circuits, the team used a liquid alloy of gallium and indium, set in water-based gels. "We've created a memory device with the physical properties of Jell-O," says Dickey. 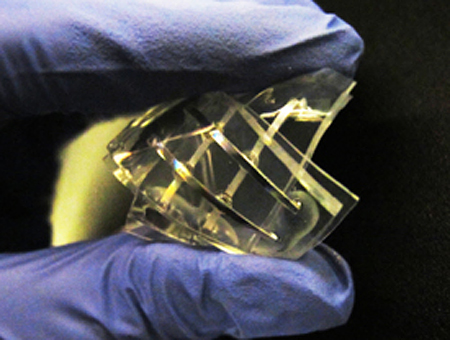 Being both squishy and hydrophilic, the circuits could be implanted in living tissue far more compatibly than garden-variety chips, where they could preform any number of different roles, from sensing biological activity to monitoring and collecting medical information – or possibly more, if your imagination has a bit of a sci-fi bent.

Memristors – a portmanteau of "memory" and "resistor" – are memory circuits that change their resistive state when voltage is applied. In the NCSU device, each memory cell has two states: conductive and non-conductive. When the liquid alloy residing in the water-based gel is giving a positive juicing, it creates a resistive oxide skin. A negative charge "annihilates" the oxide, to use the researchers' term, allowing current again to flow.

Pretty straightforward – but as the NCSU team explains, switching the charge in this way would normally only make the oxide jump from on side of the cell to the other – meaning that the cell would always be resistive. The team's breakthrough was to dope one side of the cell with a a polymer that keeps the oxide from forming, and allows the memristor effect to occur.

Although their work on mushy memristors is only beginning, the NCSU team has great hopes for the persistent-state memory technology in general. "Memristors may become the core of next generation memory devices," they write, "because of their low energy consumption and high data density and performance."

Interestingly, one of the more thought-provoking – pun intended – possibile uses of memristors was floated last year, when a University of Michigan scientist suggested that since they can operate analogously to brain synapses, they could "learn" and eventually mimic a living brain.

With the development of memristors that could live quite happily inside of a human brain, a whole range of possibilities may open up. Getting old and feeling your memory slipping? Maybe an implantation of a few gooshy gigabytes of new synapse-impersonating memristors might help?

Or how about a back-of-skull port into which you could slip a wee piece of Jell-O that contained the Encyclopaedia Britannica? Or perhaps the couplete masterful oeuvre of Alex De Renzy?

The mind – quite literally – boggles. ®