Commander Chris Ferguson and pilot Doug Hurley have fixed space shuttle Atlantis' General Purpose Computer (GPC) 4, which clapped out last night requiring transfer of its duties to another of the shuttle's quintet of GPCs.

The pair have reloaded software into the unit and it has "been added to the common set of GPCs and is operating normally, processing data".

NASA elaborates: "Mission Control is evaluating the 'dump' of data from the computer that Atlantis transmitted earlier this morning to determine what caused the Thursday evening failure. GPCs 1, 2 & 4 are in 'run' and GPC 3 is in 'standby'. All four of the primary computers are processing data." 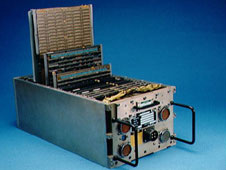 The agency describes the GPC (pictured) as "slow" and packing "little memory compared to modern home computers", specifically "a storage capacity of one megabyte". It "runs at a speed of 1.4 million instructions per second". However, NASA does quite reasonably note that "no one straps the latest-and-greatest desktop computer inside a machine that vibrates like an old truck on a washboard road while requiring it to get a spacecraft into orbit and back safely".

This modest package processes data from the shuttle's "myriad sensors" via 24 input/output links, subjecting them to "elaborate mathematical algorithms to determine when to swivel the three main engines during launch, how much to move the elevons on the wings for landing, and which thrusters to fire in space to set up a rendezvous with the International Space Station, for example".

NASA has lots more on the GPCs here. The latest from Atlantis' STS-135 mission is here. ®