It appears that Belarus president Alexander Lukashenko – faced with growing public demands that he naff off after 17 years at the helm of the former Soviet republic – is determined to go out in comedy gold style. 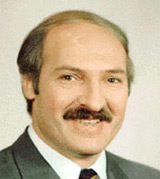 According to this report, cops loyal to "Europe's last dictator" (pictured) have been clamping down heavily on protests against the regime, and recently arrested a man for clapping at a street demonstration.

Poor old Konstantin Kaplin, an unemployed chap from Grodno, claims he was fined the equivalent of $200 for the offence, despite having a watertight defence: he only has one arm.

He explained that he was simply observing a demo and "attempting to photograph demonstrators with his cellphone when plainclothes police grabbed him".

Kaplin said of his subsequent appearance before the beak: "The judge read out the charges, the police affirmed that I was applauding, and the fine was levied."

He added: "The judge looked ashamed of herself, and I sympathise with her. She was probably under orders. But this is a huge sum for me to pay, more than twice my monthly pension, and I'm having to ask all my family and friends to help me raise it."

Kaplin isn't the only unfortunate to have been fast-tracked through the courts on trumped-up charges, as "masses" of dissident arrestees are processed.

Svetlana Kalinkina, editor of Minsk's Narodnaya Volya newspaper, explained: "There was one case where a deaf and mute person was accused of shouting anti-government slogans.

"Last week there was yet another case when a teacher was arrested while he was riding a bike and was accused of waving his arms and shouting something in a kind of protest."

Lukashenko will doubtless be called to account for his authoritarian excesses, and we sincerely hope prosecutors at his own trial insist on the maximum penalty for perhaps his worst misdemeanour – that of dyeing his absurd moustache. ®