Hackers breached the security of Rupert Murdoch's Sun website and briefly redirected many visitors to a hoax article falsely claiming the tabloid media tycoon had been found dead in his garden.

The hack caused many people visiting thesun.co.uk to instead reach www.new-times.co.uk/sun/, which contained a story headlined "Media moguls [sic] body discovered". The breach came as several other Murdoch-owned sites, including The Times,The Sunday Times, newsinternational.co.uk, and rupertmurdoch.co.uk suffered outages that made them inaccessible. The domain name system servers used to revolve many of those sites weren't responding to queries at time of writing.

"Murdoch, aged 80, has said [sic] to have ingested a large quantity of palladium before stumbling into his famous topiary garden late last night, passing out in the early hours of the morning,” the bogus article claimed.

It came as Murdoch, a trusted lieutenant and UK police officials are under fire for a scandal in which reporters for News of the World, another Murdoch-owned newspaper, gained unauthorized access to voicemail accounts of murder victims and other individuals. 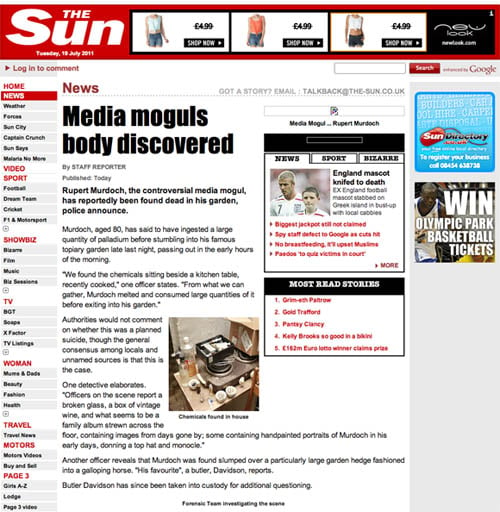 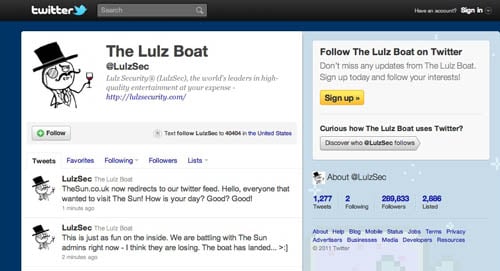 The redirections didn't work consistently, making it possible for many Sun visitors to reach the real site as intended. At time of writing, many attempts to reach the site caused redirects to the Twitter account of LulzSec, the prankster hacker collective that has made sport of attacking sites belonging to Sony, the Central Intelligence Agency, and other high-profile targets. LulzSec took responsibility for the Sun hack as well.

“It's not an easy thing to do,” Jeremiah Grossman, CTO of security firm WhiteHat Security, said of the redirection of The Sun's site. “If you can do that, you would classify it as being hacked.” It wasn't clear if the attackers had targeted the site's content management system, upstream provider, or another component.

DNS servers ns1.newsint.co.uk and ns0.newsint.co.uk, upon which the Murdoch-owned sites rely, did not respond to pings at time of writing. Trace routes to the servers' underlying IP addresses also failed.

Murdoch is scheduled to appear before a parliamentary committee on Tuesday to answer questions over voicemail breach at News International, his British newspaper division. ®

Thanks to everyone who sent in screenshots and reports.