As good as Xeon chips might be for lots of things, Intel obviously believes that it needs some other silicon: the chip giant bought privately held networking ASIC maker Fulcrum Microsystems on Tuesday.

Intel has made no secret of the fact that it wants to expand its Xeon line of server processors out into storage arrays and networking gear to keep the money rolling in and drive chip competitors out of the data center. But Xeons can't go where Fulcrum's low-powered offerings go.

Fulcrum Microsystems was founded in late 1999 – under the different name of Asynchronous Digital Design – by Uri Cummings and Andrew Lines, researchers at the California Institute of Technology. The duo wanted to commercialize the nearly two decades of work that they and their professor, Alain Martin, had done to come up with clockless, low-power, high-bandwidth chips for managing switched communications.

The company, which is based in Calabasas, California, still has Lines working as vice president of research and development and Cummings as chief technology officer – and now they're both working for Intel headman Paul Otellini.

Fulcrum delivered its PivotPoint ASICs in 2004, and has been ramping up the speed and lowering the latency of its switch chips since then. Most famously, Arista Networks, the 10 Gigabit Ethernet switch company started by Sun Microsystems cofounder Andy Bechtolsheim, uses Fulcrum ASICs at the heart of its switches. Others do, too, but they don't like to talk about it publicly.

Intel actually trotted out Bechtolsheim in its statement announcing the acquisition. "Fulcrum Microsystems has architecture capabilities ideal for low-latency applications," Bechtolsheim said, "and we are excited about the future possibilities of this technology as Fulcrum is acquired by Intel, the world’s largest semiconductor manufacturer."

Fulcrum now has a pretty broad product line, including the FocalPoint family of chips for Ethernet switches and routers (Layers 2 through 4 in the network stack), which now support 10GE and 40GE speeds. These chips include the Nexus crossbar, which Fulcrum characterizes as the "the industry’s most efficient fully connected non-blocking crossbar circuit" and which delivers over 1Tb/sec of bandwidth implemented in Taiwan Semiconductor Manufacturing Corp's 130 nanometer processes. (It can be baked in 65 nanometer processes as well.)

The FocalPoint chips also have Fulcrum's own RapidArray packet-based SRAM memory and its FlexPipe frame processing pipeline. All of these technologies are interesting for a PC and system chipmaker like Intel with its eye on integrating networking onto its chips. 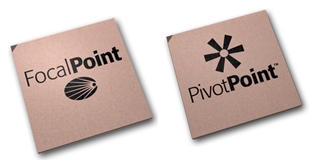 The PivotPoint chips from Fulcrum, which virtualize the connections between chips used in a wide variety of devices, are probably also something Intel was interested in for various uses. The PivotPoint chips can be used to create configurable, high-speed links between CPUs, custom ASICs, coprocessors, and FPGAs. Fulcrum also puts out reference designs for its networking customers to monkey around with, but that's not a moneymaker.

Intel didn't say what it paid for Fulcrum, but you can bet the VCs got their wad back at the very least – and probably then some. Intel expects the deal to close in the third quarter of this year after it is approved by Fulcrum's shareholders and gets through the regulatory approvals process. ®